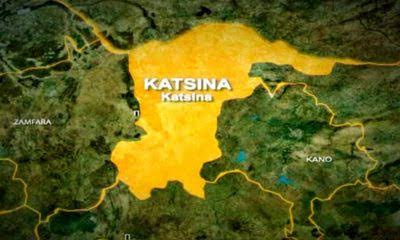 The suspected bandits stormed Sabuwar Unguwar and Sabon Layi communities in the town which is the headquarters of Kurfi Local Government Area of the state late Sunday night.

Residents gave the names of the abducted girls as Nana Friddausi Sani, 17 and Fauziya Sani, 14.

The suspected bandits were said to have abducted the two girls after forcing their way into the house where they( the girls) were staying in one of the communities.


The residents said the suspected bandits left after abducting the girls.

The Spokesman for the Katsina Police Command, SP Gambo Isah, confirmed the incident.

He revealed that a middle-aged man had already been arrested in connection with the incident.

SP Gambo said the arrested man had hitherto been sending threat messages to the mother of one of the abducted girls.

He said the man was once sentenced for an offence and was granted amnesty.

The Spokesman said, “Yes, the Kurfi abduction is true and we have been able to arrest a man who was once writing threat letters demanding money from the mother of one of the abducted girls. The man was once convicted for an offence and he was granted amnesty. Our men are working to ensure that the girls regain their freedom, soon.”

The police spokesman, however, denied the report that suspected bandits killed three persons on Saturday night at Maitsani village in the Dutsinma Local Government Area of the state.

He said, “The DPO Dutsinma denied that such an incident happened n the council and I believe him.”

Residents, however, gave the names of those killed during the attack in the village as Sada Sani, Shuaibu Abubakar, and Sani Turare.

Turare reportedly died from injuries he sustained after he was admitted at Dutsin-Ma General Hospital.

They also reportedly injured many residents and carted away a large number of sheep and cattle during the attack.