Governor Wike is a man – Ex-NDDC boss, Nunieh recounts her rescue from police 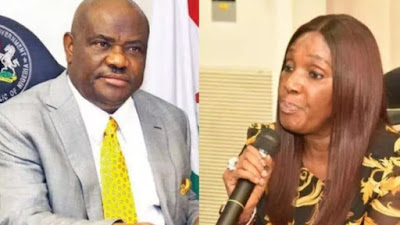 The former Managing Director of the Interim Committee of the Niger-Delta Development Commission, Joy Nunieh has thanked the Rivers state Governor, Nyesom Wike for coming to save her from an attempted arrest by security operatives.

Speaking to newsmen on telephone, Nunieh said she was surprised at the invasion of her home by Police officers, who came without an arrest warrant.

The former MD of NDDC, therefore, thanked Governor Wike for living up to his promise of protecting her.

“Senator Magnus Abe called me after a while that the CP in Rivers did not really know about it and that the CP was going to reach me. The CP did reach me and said he was not aware of what was going on.

“The CP asked that I send him my address and which I did and then I saw the cars come in. So, I asked if that was the CP, and they said no. Fortunately, I was just wise enough. I stayed by the door, and they wanted to drag me, so I just banged the door, so they can’t come in.

“I needed to see the warrant. We are not in a Banana Republic. So, as they were still trying, my Governor came and sent them out that why would they come to arrest a woman like an armed robber that they should leave the compound.

“The Governor then said I should enter the car with him. So, I am now with my Governor in Government House, Port Harcourt.

“I really want to thank the Governor. I really don’t know what to say but my Governor is a man. He is a man. He didn’t just say it that nothing should happen to me, he came to my rescue. I want to say thank you to my Governor,” Nunieh said.

Sources say Joy Nunieh is being invited for questioning by the Police, an information yet to be confirmed by the Rivers state Police Command.

The Minister of Niger-Delta Affairs, Godswill Akpabio and Nunieh have been embroiled in war of words over allegations of corruption in the NDDC.

The former MD of NDDC had accused Akpabio of sexual harassment, budget padding, fraud, among others, which the Minister has denied.