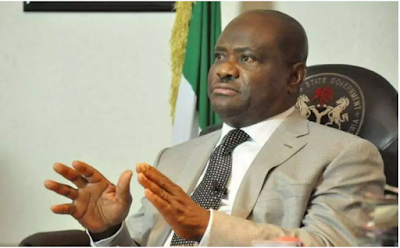 Governor Nyesom Wike of Rivers State has spoken about his alleged plans to defect to the All Progressives Congress (APC).

Wike is a leader of the Peoples Democratic Party (PDP), where he was elected into office as the governor of Rivers State.

Wike is known as a critic of President Muhammadu Buhari and the APC.

But that narrative changed lately when the governor sponsored an advertorial in national newspapers, wherein he appreciated President Buhari for approving the repayment of N78.9billion as funds spent by Rivers State on federal roads.


In the open letter of appreciation, Wike also appealed to Buhari to visit the state so as to see the projects being executed by his administration.

Following the publications, there were speculations that Wike was romancing the president as part of plans to join the APC.

But, Wike has debunked all the rumours, describing them as lies being peddled by people who love to play bad politics.

While featuring on an AIT live programme on Wednesday morning, Wike asked what purpose he would be joining the APC for when he was already on his second term as the governor of Rivers State.

“You know what I went through to win my second term. What else will I need to join APC for, is it to get a ticket for a third term or to get a presidential ticket?”

“You know when people don’t have anything to do, they go on social media to say all sorts of things,” he said.

Wike clarified that when other states received the fund for federal roads they constructed in 2018, Rivers was not included.

He recalled how he complained to the President, the late Chief of Staff, Abba Kyari and the Minister of Works, Babatunde Raji Fashola.

He said now that the fund had been approved, he and his state executive council decided to appreciate the President and other members of his cabinet, saying the main letter had been sent to Buhari three weeks ago before the advertorial.

The governor said people should learn to appreciate, saying his letter to Buhari was a mere appreciation with no intention to romance him or to join the APC.