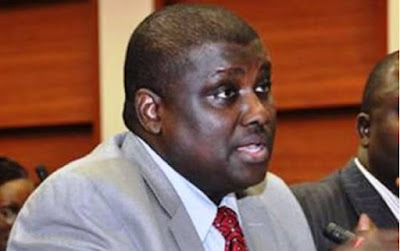 The former Chairman of the defunct Pension Reform Task Team, Abdulrasheed Maina, who is being prosecuted on money laundering charges, has been released from the Kuje prison in Abuja.

A lawyer in his defence team, Ademola Adedipe, confirmed this to our correspondent on Tuesday.

Adedipe said Maina had been in detention since November 2019 following his arraignment before Justice Okon Abang of the Federal High Court in Abuja.

His release came about a month after the judge accepted the Borno South Senator, Ali Ndume, as surety for the bail earlier granted the defendant.


“He (Maina)was released about 6pm on Monday. We are happy that he had been released. He can now attend to his health and have unfettered access to his defence team in preparation for his defence in court,” Adedipe told The Punch on Tuesday.

Asked why it took about a month after the judge in a ruling delivered on June 29, 2020 accepted Ndume to stand surety for the defendant, Adedipe said, “There was nothing spectacular. It was due to administrative issues.”

He also confirmed that the defendant’s release was based on Ndume’s suretyship.

“Yes, he was released based on Senator Ndume’s suretyship,” the lawyer added.

It was earlier reported that Maina, who hails from Borno State like Ndume, was granted bail by the court on November 26, 2019, but has remained in detention due to his inability to meet the conditions imposed by the court.

His team of lawyers later applied to the court for a review of the bail conditions.

Granting the request in his ruling delivered on January 28, 2020, Justice Abang reduced, among others, the bail sum from N1bn to N500m.

The judge, who earlier demanded two serving senators as sureties for the bail, reviewed it to one senator, who must be prepared to accompany him to court every trial date and have property worth N500m in either Asokoro, Maitama, Wuse II, Central Business District or Katampe districts in Abuja.

Still unable to meet the conditions, Maina later filed a fresh application for further review of the condition that required him to produce a serving senator as surety.

The judge, however, in his ruling delivered on April 29, 2020, dismissed the application for the second review of the bail conditions.

Having found Ndume as his surety, he again approached the court with another application for the variation of the bail conditions to make the title document held by the senator acceptable by the court.

The Economic Crimes Commission had at the hearing of the application on June 23 opposed it.

Ruling on the application on June 29, 2020, Justice Abang held that he was inclined to varying the bail conditions on compassionate grounds, especially that the defendant was able to produce a serving senator as his surety.

The EFCC had last year instituted 12 counts of money laundering against Maina along with a firm, Common Input Properties & Investment Limited, which he was accused of using to launder about N2bn in pension funds.

Maina was accused of using fictitious names to open and operate various bank accounts into which he allegedly channeled the diverted funds.

He allegedly used the money to acquire landed properties in Abuja.

He pleaded not guilty to the charges.

The trial had been adjourned till September 29