FLASHBACK: In 2018, Dogara said his dream of making Nigeria better would be realised in PDP 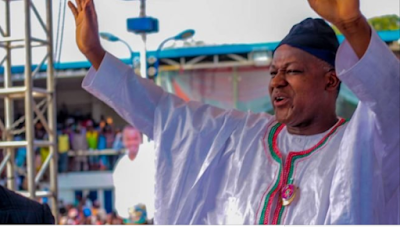 We are sure that at the end of the day the party will be proud of the exercise that we have done.

Those were the exact words of Yakubu Dogara, former speaker of the house of reps, after the Peoples Democratic Party (PDP) appointed him as chairman of the panel which screened its aspirants for the governorship primary in Ondo state.

Three weeks after carrying out such an important exercise for the opposition party, the former number four man in the country turned his back against the PDP.

Earlier on Friday, Mai Mala Buni, governor of Yobe state and chairman of the All Progressives Congress (APC) caretaker committee, announced that Dogara had returned to the ruling party.

He made the announcement shortly after he led Dogara to meet with President Muhammadu Buhari.

The ex-speaker had defected from the APC to the PDP at the height of his misunderstanding with Mohammed Abubakar, then governor of Bauchi state, where he hails from.

Abubakar had vowed to retire Dogara from politics but the former speaker said he was waiting for him on the other side.

In the end, Mohammed lost his election while Dogara was releected to represent Bogoro/Dass/Tafawa Balewa federal constituency in the house of reps.

Speaking on September 28, 2018, when he picked the PDP nomination and expression of interests forms, Dogara had said he left the APC because it had failed Nigerians.

The former speaker had said he rejoined the PDP because of pressures from his constituents, lamenting how APC’s initial agenda of bringing positive change to Nigeria was thwarted by “wayward sense of entitlement of some people.”

He said he left APC in order to the PDP where his “dream of making Nigeria better could be realised”.

“For some of us who are here, today’s event marks the end of all speculations. To begin with, I was a founding member of the PDP, which some of you don’t know. So, this is home to me,” he had said.

“I was also one of those that built APC in Bauchi state, and I can tell you that we have not fulfilled a single promise that we made. At the national level, we all know what is happening.”

Dogara’s exit from the PDP was announced 48 hours after Eyitayo Jegede, one of the aspirants he cleared for the primary, was elected governorship candidate of the PDP.