FLASHBACK: How Wike prevented DSS from arresting a judge in 2016 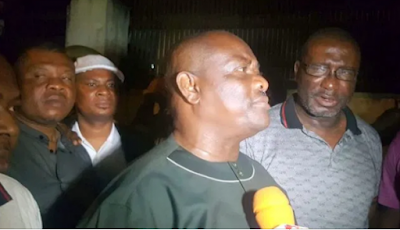 Policemen had laid a siege to Nunieh’s residence hours before she was to appear before a house of representatives’ panel probing the alleged fraud at NDDC.

Nunieh had spoken of illegalities at the commission, levelling so many allegations against Godswill Akpabio, minister of Niger Delta Affairs, whom she accused of sexual harassment.

Nunieh alleged that the minister asked her to change the dollars in the NDDC account; sack the head of the legal team who is from the north; remove all directors who refused to follow his instructions and also to implicate Peter Nwaoboshi, chairman of the senate committee on NDDC.

But for the arrival of Wike, Nunieh would have been taken away from her residence in Port Harcourt by the policemen, who according to her, pulled down the gate and attempted to break down the security door.

The governor had taken her to government house, Port Harcourt.

The incident is a reminder of how Wike foiled the attempted arrest of Mohammed Liman, a judge, on October 8, 2016.

Operatives of the Department of State Services (DSS) had stormed 35 Forces Avenue, Port Harcourt, the residence of Liman.

The DSS had raided the houses of judges across the country while searching for “evidence linking the judges to corruption”.

Some judges were later prosecuted by the secret police but Wike ensured that Liman was not arrested on the night that security operatives laid siege to his residence.

Wike had accused the security agencies of not following due process in the discharge of their duties.

“Not under my watch will I allow this kind of impunity to take place. That is why we are here. I don’t know which judge they were detailed to abduct. I didn’t bother myself to know which judge. All I am interested in is that, at this level, it is not allowed,” he had said.

“He is not a criminal and he is not an armed robber. If the person has committed an offence, invite him. It is only when he refuses to honour the invitation that you can adopt this commando style.

“The Commissioner of Police is here, the Director of DSS is here. Their operatives cocked their guns and threatened to shoot me. I have never seen that before. Again, this is to tell you what we are facing. We know that more will come. For us in this state, we shall continue to resist it.

“It doesn’t matter what it will cost. When you talk about liberty, sacrifices must be made. We are not trying to stop an arrest. All we are saying is that things must be done decently and in line with the rule of law.

“Rivers State is under siege. For you to see a governor out at this time of the day, something is wrong. A siege is an understatement. If this type of thing happens next time, the people will resist it to the last.”