Feminists attack Pastor Adeboye over advice for women to be submissive 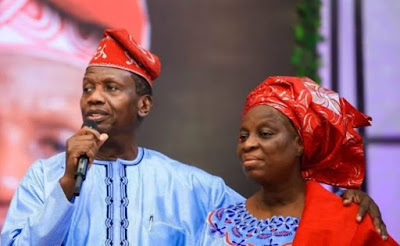 Pastor Enoch Adeboye of the Redeemed Christian Church of God, RCCG, has come under attack over his statement on Monday advising young women to learn from his wife.

Adeboye had in a birthday messageto his wife urged women to be submissive, cook and do their primary duties for their husbands.

He added that it is a terrible thing for a husband to see his wife as the head, adding that the man is the head of the home.

His comment has stirred reactions from feminists on social media who saw his statement as a way of diminishing the female gender and airing his masculinity.


According to some, Pastor Adeboye should have used his message to celebrate his wife’s achievement rather than talk about submission.

@_Toseen “if marriage is going to be how Baba Adeboye described it, then f*ck it. I cannot can.”

@Hafizbello “Using your wife’s birthday to air your fragile masculinity to be superior is one of the signs we’ve got the wrong role models. Just tweet “stay jiggy” next time.”

@BForL3 “I went through this thread expecting to see her achievements. Legacies this woman has built, stories of lives she has impacted! but no I saw a man talking about submission eww!

@Seun_oj “Pastor Adeboye is not setting standard for anyone,he’s only expressing how submissive his wife has been these past few years.”

@GemmaOkpe “It worked then because they believed that was how it should be. Things keep changing, change is constant. They did it then doesn’t mean it’s right. Mutual respect is key.”

@Jules “I’m literally disappointed. Instead of eulogising the woman. You make it about you and how submissive she is. I literally cringed reading this.”

@Ebelee “Do you know how ugly it is that you need to reduce someone to feel worthy. Everyday “we rise by lifting others” until it’s your wife and then you rise by reducing her and removing her head so you can replace it with your own. That Pastor Adeboye thread is horrible on many levels.”

@Lettertojack “Pastor Adeboye is not wrong in how he thought was the best way to celebrate his wife. But we have to do better, we must unlearn celebrating women (wives) based on how much they can serve us alone, we should celebrate them on what they have accomplished too.”

@Mochievious “Pastor Adeboye should have just said “happy birthday flesh of my flesh” and keep it moving. Now we know he can’t do basic things like feed himself and trim his nails. “

@Kcnaija “If you don’t like how Pastor Adeboye and wife live their lives and how they are a model for greater number of people, you can take after Will Smith and Jada and entangle. Stop the attack on conservative Christian values in the name of wokeness, modernism and liberalism.”

@TifeOfficial “Normally,Women are supposed to be submissive to their Husbands,Pastor Adeboye was just stating facts and Appreciating his wife for being submissive,so it’s stupid to insult him,when he was just being right. Plus:if he was a terrible Husband,submission would have been hard for her.”

@SoniaEzee “Who trims her nail, who’s her cheerleader, she’s not deserving of that.On her freeking birthday you couldn’t give the woman a break you just made the whole thing about yourself, she basically exists through your shadow. Her purpose in life is to serve you all the days of her life.”

@FavouredSinner “Pastor Adeboye just showed you what a real Christian marriage should look like.If you are a Christian and you are a feminist, you are in a wrong religion.What is in the Bible is the opposite of what feminism is all about, and Man is just practicing his religion.”