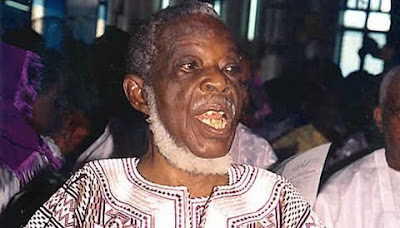 Yoruba socio-cultural group, Afenifere, says the late Pa Ayo Fasanmi who died on Wednesday at the age of 94 lived a life of fulfillment.

The Spokesman for Afenifere, Mr. Yinka Odumakin, said this in a telephone interview with newsmen on Thursday.

He said, “He lived a long life of fulfillment and we pray his soul rests in perfect peace.”

Odumakin said the group would send in a tribute to the late Yoruba leader later.


Until his demise, Fasanmi was the leader of Yoruba socio-cultural group, Egbe Afenifere, and a chieftain of the All Progressives Congress.

He joined the Obafemi Awolowo-led Unity Party of Nigeria in 1978 and was a candidate in the Ondo State governorship primary election but lost to Adekunle Ajasin, the former governor of Ondo State.