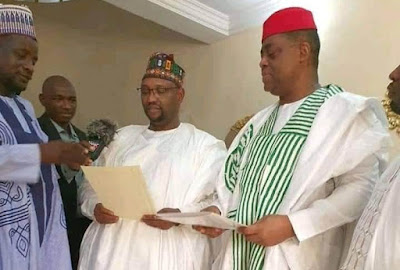 The Shinkafi Emir­ate Council has insisted that the “Sadaukin Shinkafi” title conferred on former Min­ister of Aviation Chief Femi Fani-Kayode, by the Emir Of Shinkafi, Alhaji Muhammad Makwash is ir­revocable and irreversible.

This is coming after five titleholders in the Shinkafi Emirate Council resigned, calling for the immediate reversal of the title. Their reason for disputing the conferment is because FFK is fond of insulting people from the North.

However, Wambai Shinkafi, Dr Sani Abdulla­hi Shinkafi who spoke on behalf of the emirate insisted that conferment of titles by the Emir cannot be reversed. Sani stated that the gesture is to deserving recipients ex­ercised within the powers and the discretion of Emir.

He warned against playing the ethnic and religion card in the traditional exercise.

Dr Sani Abdulla­hi Shinkafi said; “Femi Fani-Kayode is not the only non-Muslim to bag a title from the North.

”It is worthy of note that several northern tradi­tional rulers had conferred titles on southerners like Chief Olusegun Obasanjo who was conferred with Chieftaincy title of Yalla­ban Sokoto, Chief Rochas Okorocha Danjekan Soko­to, Senator Orji Uzo Kalu Wakilin Anka, and former President Goodluck Ebele Jonathan who was con­ferred with the Garkuwan Manoman Zamfara.

“There is no hatred be­tween Muslims and Chris­tians or northerners and southerners but some people who want to ignite hatred are reading political mean­ing to it. He was chosen so that we can foster unity. He served as a minister and rep­resented the whole of Nigeria.”