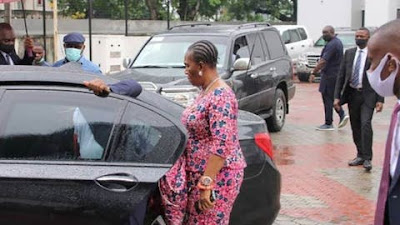 Falana also demanded that the Department of State Services obey three separate court orders for the release of an Aba, Abia State-based lawyer, Mr. Emperor Ogbonna, who was arrested in March this year for criticising Governor Okezie Ikpeazu in a Facebook post.

On Wike’s intervention preventing Nunieh’s arrested, Falana noted in his statement on Sunday that the security operatives’ invasion of her house on July 16 was a desperate attempt to prevent her from testifying before a committee of the House of Representatives probing into diversion of huge funds belonging to the NDCC.

He said if Wike had not prevented the arrest, the police would have abducted and detained Nunieh in further violation of her rights.

He added that since the Rivers State Police Command had dissociated itself from the planned arrest, “the Inspector-General of Police, Mr. Mohammed Adamu should investigate the circumstances surrounding the deployment of the team of police personnel involved in such reckless abuse of power”.

The statement read in part, “In a desperate bid to prevent Ms Joy Nunien from testifying before the House Committee probing the monumental criminal diversion of the huge public fund allocated to the Niger Delta Development Corporation the police invaded her house in Port Harcourt, Rivers State at 4 am on Thursday, July 16, 2020.

“No doubt, Ms Nunieh would have been abducted and taken to custody  but for the Rivers State Governor, Mr. Nyesom Wike who intervened and prevented the Police from further infringing on her fundamental rights to personal liberty, dignity and privacy of her home guaranteed by sections 34, 35 and 37 of the Nigerian Constitution.”

He said while “Governor deserves kudos for his timely intervention”, “the principalities who feel offended by Ms Nunieh’s disclosures” should explore the option of suing her for libel in a civil court”.

He also called on the President Muhammadu Buhari to “dissolve the illegally constituted Interim Management Committee of the NDDC which has since become a cesspool of grand corruption”.

On Ogbonna’s detention since March this year, Falana said the lawyer “had been dumped in the detention facility of the State Security Service in Umuahia”, adding that “all efforts made by the Nigerian  Bar Association and Mr Ogbonna’s lawyers to enforce the two orders granted by the Federal High Court for his release from illegal custody have proved abortive”.

He added following a public interest filed at the Federal High Court in Abuja by Mr. Monday Ubani to challenge the lawyer’s continued detention, the court on Friday “granted the application for the bail of Mr. Ogbonna pending the determination of the substantive application”.