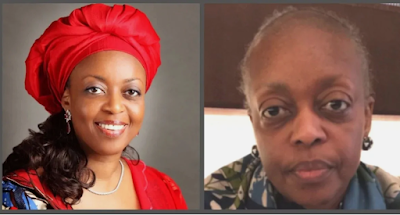 A prosecution witness in the trial of Dauda Lawal, former Executive Director, First Bank Plc, has told Justice Muslim Hassan of the Federal High Court sitting in Ikoyi, Lagos, how he delivered 12 padlocked bags containing $70 million to an Abuja-based banker.

He said this was on the instruction of ex-Minister of Petroleum Resources, Diezani Alison-Madueke.

His identity is being protected.


Lawal is facing trial for allegedly handling the sum of $25 million, out of a total of $153 million doled out by Diezani in the build-up to the 2015 general elections.

A statement by the EFCC spokesman, Dele Oyewale, quoted the witness as narrating that he delivered the bags loaded with cash to the banker, one Charles, in front of Dume Supermarket in Abuja.

Led in evidence by the prosecution counsel, Rotimi Oyedepo, the witness said: “My Lord, as I can remember, shortly before the 2015 elections, it was the norm for heads of subsidiaries of the NNPC to be invited for undisclosed briefing of activities of their departments to the minister”.

He recalled that at the end of one of such briefings, Diezani gave him the phone number of a banker he had never met, “with a clear instruction that I should convey 12 padlocked bags to him”.

“The source, the content and the purpose of the bags were not disclosed to me. Thereafter, I called the banker who equally confirmed to me that he had been briefed about the message. I delivered the bags to him.”

The ex-GGM added that much later, the EFCC invited him for interrogation on the issue and he made a statement to that effect.

Asked by Oyedepo to describe the kind of relationship he and others had with Diezani, the witness said: “We had a command-and-obey relationship and also took an oath of office to obey directives and authority.”

During cross-examination by defence counsel, Patrick Ikwueto, SAN, the witness said he had never met Dauda Lawal before.