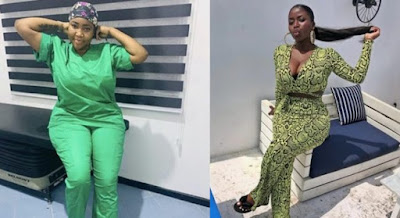 Omohtee who admitted she has been suicidal over the many complications she suffered after the surgery said that Dr Anu “showed me pepper”.

She revealed that she although she paid Dr Anuoluwapo Adepoju popularly known as Dr Anu N1.2 million for liposuction and Brazilian Butt Lift surgery,her finances have taken a hit due to unending medical sessions after the botched procedure done by the doctor

Omothee said she now has to see a doctor three times in a week.

“I met Dr Anu because I wanted to do a top-up of my ass. BBL and liposuction,” she said.

“My belly wasn’t flat enough. I wanted to remove some fat there and augment my bum. December 31st, I paid N1.2 million into her account. After the surgery, I started having complications.

“Belly burns, waist numb. After two months, fat necrosis kicked in. This is when liquid fat turns dirt and is coming out like a boil, bursts, and starts to eject fat. Up till now, my waist is still numb.

Omothee said she became suicidal after the procedure as social media users blamed her despite being the victim.

“When I went to social media, the abuse was really bad. People cursed me, some even wished me dead. This thing has drained me financially and affected me mentally. People beauty-shamed me,” she said.

Adepoju, who blamed complications on the disobedience of post-surgery rules, told BBC Pidgin that she is not a plastic surgeon and has never dubbed herself to be one.

“Usually, we advise patients on what to do after such surgeries but they don’t follow medical directives,” she said in response to a narration by another of her clients, Omothee, about a botched procedure.

“They feel they know how to take care of themselves but blame the doctors at the end of the day when things go wrong. Plastic surgery and cosmetic surgery; people always confuse the two.

“They would say I don’t belong to the NAPRAS group, which is an association of plastic surgeons in Nigeria. I’m not a plastic surgeon and I’ve never dubbed myself one. I’m a cosmetic surgeon.

“I focus on liposuction. The basic requirement for cosmetic surgeons is an MBBS. Every doctor who has an MBBS is a physician and surgeon first of all. That gave me the right to do liposuction.”

Dr was recently arraigned at the federal high court in Ikoyi on Friday, July 3, after her facility was shut down in response to the death of one Nneka Miriam. She was also charged with non-compliance to a summon by the FCCPC