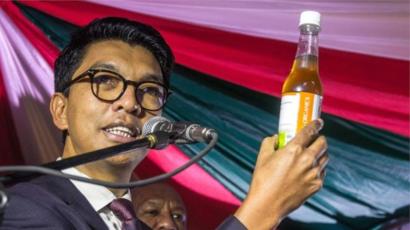 Cracks are appearing in Madagascar’s government after its health minister requested international help to cope with a surge in COVID-19 cases.

And this is despite an official campaign to promote a touted fix for the virus, the herbal drink called COVID-ORGANICS.

The government has been distributing the herbal drink that President Andry Rajoelina has proclaimed as a cure for coronavirus and protection against it, despite warnings the brew has not been clinically tested.

Hospital officials in the capital Antananarivo have said they are running out of beds as infections have surged in recent days.


Madagascar’s COVID-Organics being dispensed to people on the street

Recovery is however high. The number of recovered patients is 4,662, while 3,431 cases are active.

“The government would like to express its dismay at the discovery of a letter signed by the minister of public health urgently requesting support in the fight against the COVID-19 epidemic,” government spokeswoman Lalatiana Rakotozafy said in a statement dated Tuesday.

In a letter addressed Monday to donors, Health Minister Ahmad Ahmad made an “urgent appeal” to development agencies.

“Over the past weeks, the COVID-19 epidemic has evolved in a very critical way in Madagascar with notable flare-ups in certain regions, particularly in Antananarivo,” it said.

“It is clear that many crucial points in the management of this health crisis have escaped the vigilance of the minister of public health,” it said.

President Rajoelina has been promoting an infusion derived from artemisia — a plant with proven anti-malarial properties — as a homegrown cure for COVID-19.

The drink, which has been called Covid-Organics, has been distributed not only in Madagascar but also in several other countries, mainly in Africa.

The UN’s World Health Organization (WHO) has cautioned that there have been no published scientific studies to validate claims for the drink, and mainstream scientists have pointed out the potential risks from untested concoctions.

Most of Madagascar’s 26 million inhabitants live in grinding poverty with limited access to healthcare, and regularly take herbal teas for a variety of common ailments.

The government has blamed the recent jump in cases on “increased testing capacity”.

“Positive COVID-19 cases did not take (Covid-Organics) or only took it sporadically, without following the prescribed dosage,” said official documents sent to AFP on Tuesday.

On June 4, Education Minister Rijasoa Andriamanana was sacked after announcing a plan to spend $2.2 million (1.9 million euros) on sweets and lollipops for children to ease the “bitter taste” of the drink.

The expense sparked outrage, fanned by the Malagasy press, and the order was cancelled.