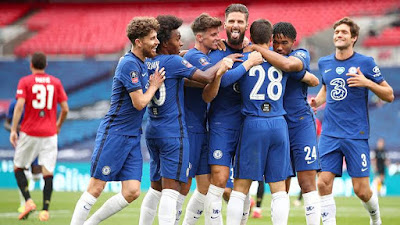 Chelsea is through to the FA Cup final after beating Manchester United 3-1 on Sunday in the second semifinal, with all three goals coming on errors.

The first two were gifts from goalkeeper David de Gea, and to make it worse Harry Maguire knocked the ball into his own net late to complete the unflattering scoreline.

Olivier Giroud and Mason Mount scored on both sides of half time, and the Spanish goalkeeper should have saved both but didn't, ending United's 19-match unbeaten streak. By the time the third goal came, this one was already over.


The Blues, who didn't start Christian Pulisic, were the sharper side throughout but benefited by de Gea's poor execution on shots he made contact with before they trickled by him.

The first, right before halftime, came as Giroud went near post and put a cross on frame. Take a look:

The second, just a minute into the second half, saw Mount shoot from range. De Gea met the ball down to his left, but it somehow got by him.

United lacked sharpness in the final third, and key contributors Paul Pogba and Anthony Martial both started the match on the bench and failed to make an impact, ending the team's run in the tournament.

Chelsea will now face Arsenal in the FA Cup final on Aug. 1 at Wembley Stadium. Chelsea and Arsenal met in the Europa League final last season with the Blues winning the crown.