COVID-19: 74 in prison despite qualifying for amnesty – Falana 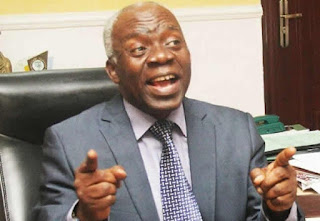 Human rights lawyer, Mr. Femi Falana (SAN), has written a letter to the Minister of Interior, Rauf Aregbesola, requesting the release of 74 persons who remain in prison custody despite qualifying for amnesty being granted to some inmates due to the Covid-19 pandemic.

In three separate letters sent to Aregbesola, Falana said most of them were soldiers who were convicted and had served more than 75 per cent of their time but remained in custody.

He said 66 of the soldiers are being held at the Kirikiri Maximum Correctional Centre, Apapa, Lagos while eight others were convicted for drug trafficking in Thailand.

About 12 of the soldiers were convicted on the same case while 54 others had a separate case.

The activist explained that they were brought before a general court-martial with six counts of committing mutiny, criminal conspiracy to commit mutiny, attempted murder, disobedience to particular orders, insubordinate behaviour contrary to and punishable under the law, and false accusation.

At the end of the trial, they were convicted and sentenced to death.

Falana said upon a review of the case the confirming authority upheld the conviction but commuted the death sentence to 10 years imprisonment.

He wrote, “Since our clients are entitled to remission of the 10-year jail term they are required to spend a total of 80 months in prison custody. From September 16, 2014 to April 20, 2020 our clients have spent over 67 months in custody.

“In exercise of the powers of prerogative of mercy under Section 175 of the constitution President Muhammadu Buhari has granted amnesty to certain categories of convicted inmates including those who have spent 75 per cent of their sentence after remission.

“Having been in custody for 67 months out of the prison term of 80 months you will agree with us that our clients have spent more than 75 per cent of their 10-year imprisonment.”