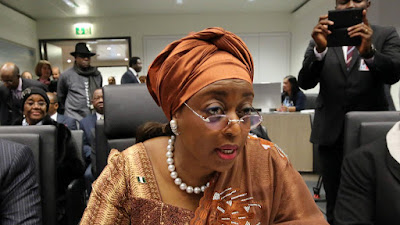 A federal high court in Abuja has ordered Diezani Alison-Madueke, former minister of petroleum, to appear before it to answer money laundering charges preferred against her by the Economic and Financial Crimes Commission (EFCC).

Ijeoma Ojkukwu, the presiding judge, gave the order while ruling on an ex parte application brought before her by Faruk Abdallah, counsel to the EFCC, on Friday.

In the suit marked: FHC/ABJ/CR/208/2018, the EFCC filed 13 counts of money laundering involving $39.7m and N3.32bn said to be proceeds of unlawful activities against the former petroleum minister.

While urging the court to grant the order, Abdallah said Diezani fled the country shortly after leaving office in 2015, and efforts to get her back to respond to the various criminal allegations against her has proved abortive.

A document showing many allegations against Diezani, including “her role as the minister of petroleum resources and her role in the award of strategic alliance agreement (SAA) to Septa Energy Limited, Atlantic Energy Drilling Concept Limited and Atlantic Energy Brass Development Limited by NNPC, were attached to the motion.

Abdallah added that Diezani ought to respond to question about “her role in the chartering of private jets by the Nigerian National Petroleum Corporation (NNPC) and ministry of petroleum resources and her role in the award of contracts by NNPC to Marine and Logistics Services Limited.”

The former minister is also wanted to give account of several items including documents and pieces of jewellery recovered from her house at No: 10, Chiluba Close, off Jose Marti Street, Asokoro, Abuja, and some identified properties that were linked to her in Nigeria, UK, United States of America (USA), United Arab Emirate (UAE) and South Africa.

The commission also wants Diezani to resolve issues concerning “her role in financing the 2015 general election, particularly the money that were warehoused at Fidelity Bank Plc in 2015 before the elections.”

He prayed the court to compel the accused to appear in court.

Delivering the ruling, Ojukwu ordered the issuance of summons on Diezani for her to be arraigned on the charge.

She added that the court’s summons be published on the website of the EFCC and a national newspaper in a conspicuous manner, for Diezani to be aware of the invitation.