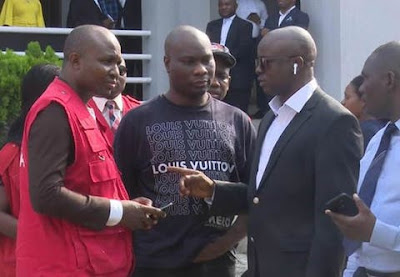 The Federal High Court in Lagos has fixed July 24 to rule on an application by Internet celebrity, Ismaila Mustapha, alias Mompha, to recover items seized from him by the Economic and Financial Crimes Commission.

In an application on Friday by his lawyer, Mr Gboyega Oyewole (SAN), Mompha listed the seized items as “five wristwatches, one Apple Air pod, one iPhone 8 mobile phone and one pair of sunglasses.”

But the application was vehemently opposed by the EFCC lawyer, Rotimi Oyedepo, who described it as vexatious.

The EFCC is prosecuting Mompha and his company, Ismalob Global Investment Limited, for allegedly laundering a total of N32.95bn.


The defendants were charged with 14 counts, bordering on fraud, money laundering and running a foreign exchange business without the authorisation of the Central Bank of Nigeria.

But they have pleaded not guilty.

In opposing Mompha’s application for the release of his “personal belongings” seized by the EFCC, an investigator with the EFCC, Idi Musa, said Mompha “is still under investigation for offences bordering on fraudulent transactions, aiding and abetting, money laundering and computer-related fraud that are different from the current charge at hand.

“Releasing the applicant’s recovered items will jeopardise the said ongoing investigation that has recorded remarkable success so far.”

Following an argument between Oyewole and Oyedepo on Friday, Justice Mohammed Liman adjourned till July 24 for a ruling.

Meanwhile, the EFCC closed its case in the trial on Friday after calling its last witness.

Mompha’s lawyer, Oyewole, indicated that he would be filing a no-case submission on behalf of his client for the court to dismiss the charges.

In the charges, the EFCC alleged that between 2015 and 2018, Mompha procured Ismalob Global Investment Limited to retain an aggregate of N32.95bn in its bank account.

The EFCC said he ought to have reasonably known that the funds formed parts of proceeds of an unlawful act; to wit: fraud.

In the counts against Ismalob Global Investment Limited, the EFCC said as a designated non-financial institution, the firm failed to report to the EFCC within seven days huge single lodgments and transfers such as N104.8m, N135m, N20m, N150m, N22.3m, N100m and N42m.

Furthermore, the EFCC alleged that not being an authorised buyer of foreign exchange currency appointed by the CBN, Mompha negotiated several foreign exchange transactions with different individuals in the sums of N20m, N22.3m, N30m, N100m and N40.7m.