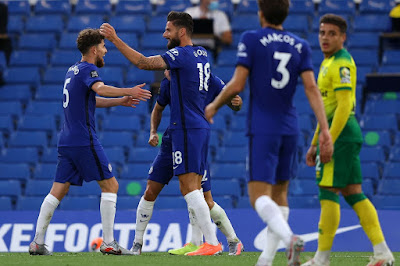 Chelsea were utterly dominant in the first-half, if not exactly threatening as the game quickly settled into an attack-vs-defense exercise.

Half-chances for Pulisic and Giroud passed without much concern while Kurt Zouma put an open header wide with half the net to aim at from one of the half-dozen corners that Chelsea won in the first half.

Just when it looked like we’d head into the break fully frustrated and halfway asleep, Giroud lost his man to get on the end of a perfect Pulisic cross and head Chelsea into the lead from point blank range on the stroke of half-time.

Chelsea were not able to build on that momentum in the second half, and Norwich started to come into the game around the hour-mark. Chelsea answered that brief resurgence with a flurry of decent chances, forcing Krul into a couple good saves (Pulisic, Alonso), before both teams shuffled their cards.


Chelsea continued to press for a second as nerves heightened. But Norwich posed no real danger, and the points were safe.