Buratai gives self pass mark after meeting Buhari over insecurity 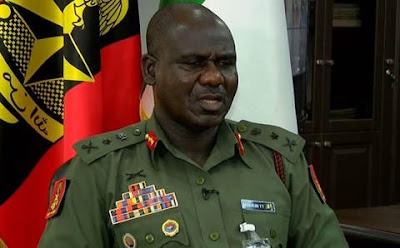 The Chief of Army Staff, Tukur Buratai, on Monday emerged from a meeting with  President Muhammadu Buhari on the deteriorating security situation across the country, beating his chest that he has done well.

The meeting took place at the Presidential Villa, Abuja, at a time there are increasing activities of bandits, insurgents, and kidnappers in parts of the country.

At a meeting Buhari had with the nation’s security chiefs in June, he had told them that while they are trying to tackle security challenges, their best is not good enough.

He told them that he would no longer accept what he described as excuses from them.


But Buratai told State House correspondents at the end of the meeting with the President on Monday that he had succeeded in restoring normalcy to the North West where he claimed farmers are no longer facing any threat while carrying out their activities.

He boasted that he had accomplished one aspect of the task Buhari gave him and he met with the President to brief him on ongoing military operations in the North West and North East and other matters that concern the Nigerian Army.

The Army chief said, “The security situation, I assure you, is under control and is not like what used to happen a month or two ago. We are working very hard and the troops are doing very well and I commend them for the efforts they have put in so far.

“These include the kinetic and the non-kinetic aspects of our ‘Exercise Sahel Sanity.’ We are there fully supporting operation Hadarin Daji, which is a joint operation of the security agencies.

“So far, this collective effort is making tremendous progress in the area of bringing normalcy. Unlike the series of killings, kidnappings, cattle rustling and of course the threats to prevent the people from going to their farms, these have been removed with the presence of the number of troops in the North West and they are carrying out surveillance operations, patrol to ensure that no one is molested if they go outside the community to farm or harvest.

“We will ensure that this is sustained throughout this farming season and beyond. What we require is the full support of everyone in the area.”

When asked to state the task that was given to him by the President which he claimed he had accomplished one aspect, Buratai said the task was to secure the country from any form of insecurity.

He explained that the military’s tasks are to defend the country from external aggression and to come to the aid of civil authority.

“So, it is the same task that we should end or curtail or bring to the barest minimum the issue of kidnapping, banditry, terrorism and insurgency and we have been doing it for a long time. We are essentially supporting the police to ensure that our country is safe,” he explained.

When asked if Nigeria can win the war against insecurity, Buratai said the feat could be achieved with the support of Nigerians.

He said the military needed the cooperation of all Nigerians since the criminals are Nigerians and they live with the people.