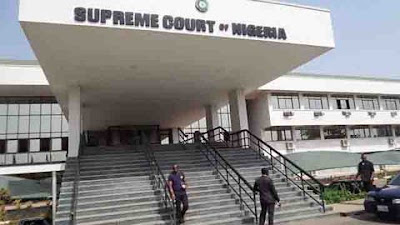 The Supreme Court ruled on Tuesday that virtual court sittings are not unconstitutional.

A seven-man panel of the apex court led by Justice Olabode Rhodes-Vivour held that virtual court sittings are presumed to be valid and not been declared unconstitutional by the apex court.

Members of the panel dismissed the fear said to be entertained by many judges as to the constitutionality of remote hearings in the country.

They maintained that the Chief Judges of the states that had issued practice direction to provide for virtual sitting when convenient had the duty to enforce the directive.


They made the comments during the hearing of separate suits filed by the Attorneys-General of Lagos and Ekiti states on the adoption of remote hearings by judges in their states.

The panel described the suits of both the Lagos and Ekiti states’ AGs as speculative as the suits did not disclose how virtual proceedings had injured the interest or right of anyone.

Both the Lagos State AG, Moyosore Onigbanjo (SAN), and that of Ekiti State, Olawale Fapohunda, then withdrew the suits after members of the apex court panel described the suits and academic and speculative.

In striking out the suit, Justice Rhodes-Vivour held that “as of today, virtual sitting is not unconstitutional”.

While Lagos State filed its suit challenging the power of the National Assembly to amend section 274 of the Constitution which seeks including virtual proceedings in the Constitution, Ekiti State had urged the court to make an affirmative decision on the issue to remove the speculations and uncertainties being entertained about it by judges.