BREAKING: Police take over Ondo Assembly as deputy governor may be impeached today. 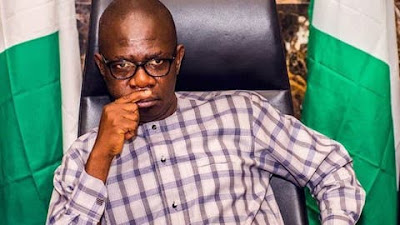 Armed Mobile Police Officers have taken over the Ondo State House of Assembly premises ostensibly to commence the impeachment of the defected deputy governor Hon Agboola Ajayi may be impeached today.

No fewer than ten police and Nigeria Security and Civil Defence Corps patrol vehicles were stationed at the entrance of the assembly.

Journalists were asked to call the chairman of the House. Committee on information Hon Gbenga Omole who will give express permission for them to gain access into the complex.


Only lawmakers and workers in the complex were allowed into the premises.

Recall that the lawmakers were asked to return from their recess through a paid advertisement in a National newspaper last weekend.

The paid advert was signed by the clerk of the Assembly Bode Adeyelu who said that legislative duties would commence immediately.

Meanwhile, reports had it that the lawmakers were recalled to commenced the impeachment of the defected deputy governor.

The embattled deputy governor however sensing danger had late yesterday approached the court to halt his planned impeachment.

Ajayi through his lawyer has filed a suit seeking to stop the impeachment proceeding and enforce his fundamental right of association.

Other defendants in the suit filed by his lawyers, aside from the House of Assembly, include the Inspector General of Police, State Commissioner Of Police, Department of State Services (DSS) and the Speaker of the Assembly, Mr David Oloyelogun

The suit filed by Mr I. Olatoke SAN seeks to enforce the fundamental right of the Deputy Governor to retain his position having defected from the ruling All Progressives Congress (APC) to Peoples Democratic Party (PDP).

Media aides to Ajayi said that the assembly had since been served with the court papers.