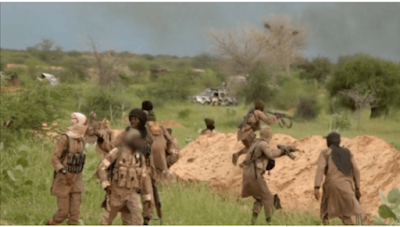 The 333 Artillery Barracks in Maiduguri, Borno state, is currently under Boko Haram attack.

Military sources disclosed that the insurgents stormed the town around 11:20pm on Monday, firing shots into the barracks.

The soldiers responded immediately but the insurgents had already surrounded the barracks, according to a source.

The barracks is a short distance from the Nigerian Air Force base in the ancient city.


Boko Haram had initially attacked some parts of the town before heading to the barracks.

A resident, who did not want to be named, said the insurgents had earlier abducted some travellers on Maiduguri-Damaturu road.

TheCable reports that Tajudeen Umar, a Maiduguri resident, revealed that loud explosion roused him from sleep.

“We are under serious attack in this city. Sounds of gunshot and bombs from different direction. I can’t tell precisely where this is from but the sounds are clear,” he said.

The attacks happened on a day the service chiefs marked their fifth anniversary in office.

President Muhammadu Buhari had appointed them on July 13, 2015, but there have been complaints about their performance and their long stay in office.

Boko Haram has continued to carry out different attacks despite the government’s claim that they have been defeated.