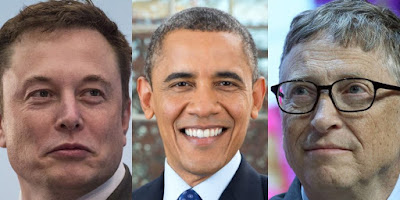 Verified Twitter accounts owned by Bill Gates, founder of Microsoft, and Elon Musk, chief executive officer of SpaceX, have been hacked in a suspected bitcoin scam.

The accounts were hacked alongside those of other high-profile users on Wednesday evening.

Jeff Bezos, CEO of Amazon; Joe Biden, US democratic presidential aspirant; Kanye West, US rapper; Apple; and Uber, are among the victims of suspected bitcoin hackers.

Others include Barack Obama, former US president; and Michael Bloomberg, former mayor of New York City.

The scam was done in a series of coordinated tweets with emphasis on “giving back” through doubling of bitcoins amid the coronavirus pandemic.


The tweets provided details of bitcoin addresses where the transaction is to be made.


Kanye west, Jeff Bezos, Bill Gates and Elon Musk Twitter accounts got hacked and this guys have made over 10M dollars

5,314 people have fallen for the scam already, and sent these hackers $7.8M USD thus far.

Similar tweets were shared from other accounts, stating that the transactions will be done within 30 minutes.

According to data from the public register of bitcoin transactions, the bitcoin address was inundated with more than 200 instances of people sending it money, adding up to a total of $100,000.

This implies that several persons complied with the request.

Many of the hacked accounts have high number of followers. Gates has 51.1 million Twitter followers, Musk has 36.9 million, while Apple has 4.5 million followers.