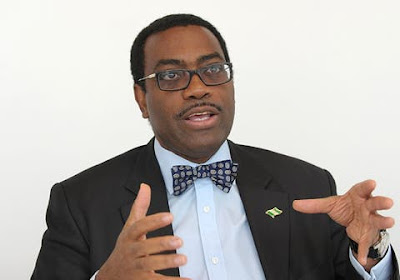 The African Union has congratulated Nigerian-born African Development Bank President, Akinwumi Adesina, on the clearing of all allegations levelled against him at the bank.

The continental body also restated its commitment to support the reelection bid of the sixty-year-old who became the first Nigerian to helm the AfDB in 2015.

An independent panel of experts, headed by former Irish President, Mary Robinson, this week cleared the beleaguered leader of the bank of corruption allegations.

“The Panel concurs with the Committee in its findings in respect of all the allegations against the President and finds that they were properly considered and dismissed by the Committee,” the panel’s report concluded.


The Chairperson of the African Union Commission, Moussa Mahamat, said the vindication of Adesina by the panel outlined the value of integrity that Adesina personifies.

“My warmest congratulations to Akinwumi Adesina following the confirmation by internal and external reviews of his leadership and integrity as president of the AfDB Group. I reaffirm our continued steadfast support as he seeks to renew his mandate as the African Union-endorsed candidate,” the AUC chair tweeted on Wednesday.

The African banking institution and Adesina, who is the sole candidate for the bank’s August’s presidential elections, had been in the eye of the storm since April over allegations of impropriety levelled against him by some whistleblowers working in the bank.

But the former Nigerian agriculture minister had always stated he was “innocent” of the charges.

Robinson, who led Ireland from 1990 to 1997 before serving as the United Nations High Commissioner for Human Rights until 2002,  dismissed the 16 whistleblower allegations against Adesina.

The board subsequently authorised an independent review of the Ethics Committee report on Adesina, who has received the backing of Nigeria and other African countries ahead of his reelection next month.