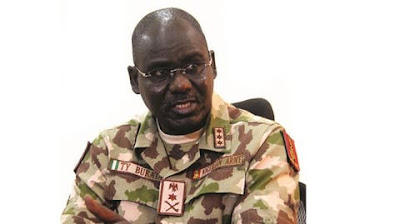 The Nigerian Army has dismissed over 300 soldiers from service for deserting the Operation Lafiya Dole counter-insurgency campaign in the North-East and going away without leave, among other allegations.

Findings by our correspondent revealed that the men were disengaged by their unit commanders between 2015 and 2016.

Investigations showed that some of the soldiers were also discharged for certificate forgery, age fraud, inconsistent Bank Verification Number and other conduct deemed inappropriate by the various unit commanders.

Records obtained by newsmen show that 24 soldiers of the 118 Task Force Battalion, Kaura Cross, Baga, were dismissed from the military on December 13, 2015, for refusing to board an articulated truck from Maimalari cantonment to Baga.


The men had complained about the mode of transportation and proceeded to trek for five days to the battlefront at Baga to retake the location from Boko Haram.

On arrival, their Commanding Officer, Col. S. Omolori, charged them with desertion and dismissed the first batch of 24 soldiers.

Three weeks later on January  4, 2016, Omolori discharged the second set of 30 soldiers and another 24 men also for desertion.

Further investigations revealed that 45 soldiers of 157 Battalion were equally expelled on January 16, 2016, for going AWOL.

Also, on February 28, 2016, 24 soldiers were demobilised for going AWOL just as 36 privates who graduated from the Army depot were sent packing by the authorities for certificate forgery, inconsistent BVN, age fraud, among other issues.

Checks, however, revealed that some of the affected soldiers had challenged their dismissal by their unit commanders, whom they accused of high-handedness and tyranny.

The ex-soldiers, in their petitions to the Chief of Army Staff, Lt. Gen. Tukur Buratai, pleaded to be reabsorbed into the military.

A lawyer to the former troopers, Johnson Oyewole, expressed confidence that the COAS would address the soldiers’ complaints, nullify their dismissal and reinstate them into the army, noting that many cases were being reviewed.

Oyewole, who is representing over 200 dismissed soldiers, said, “The problem is from some field commanders who have failed to flush out insurgents in their areas of responsibility and were venting their frustration on the troops.”