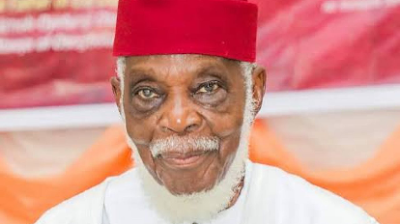 The All Progressives Congress, (APC) in Ekiti State has described the death of Senator Ayo Fasanmi, the Jagun Osin of Iye Ekiti, as an unquantifiable loss to the progressives fold.

Fasanmi, who died in Osogbo on Wednesday, is from Iye Ekiti, in Ilejemeje Local Government.

Chairman of the party in the state, Barrister Paul Omotoso said in Ado Ekiti that the second republic senator, who represented Ekiti while still in old Ondo state, remained an encyclopedia of knowledge to his people.

According to Omotoso, as a committed Awoist, who stood firmly till the end with the late sage, Chief Obafemi Awolowo, Baba Fasanmi was trustworthy and committed to ideals of the Progressives.


“His death at age 94 can best be described as a great loss to the Progressives fold in Nigeria, especially the southwest.

“As a founding member of the defunct Action Group,(AG), Unity Party of Nigeria, (UPN), he never deflected from those political parties and their ideals, despite that he lost the opportunity of governing the old Ondo state to late Pa Michael Ajasin.”

A statement signed by the Publicity Secretary of APC in Ekiti State, Hon Ade Ajayi, explained that Pa Fasanmi was equally not found wanting at the formative stages of the AC, ACN and the APC as he was always ready and free to offer advice when necessary.

“His leadership role in the socio-political organization, Afenifere, turned the organization to a credible and formidable one always ready to defend the position of the southwest region in the comity of other regions in the country.

“Until his passage on Wednesday evening, Senator Fasanmi, despite his old age, was never absent at any meeting of the organization.”

The statement also noted the late Senator’s support for the present administration of Governor Kayode Fayemi and its programmes and prayed God to give the family fortitude to hear the irreparable loss.