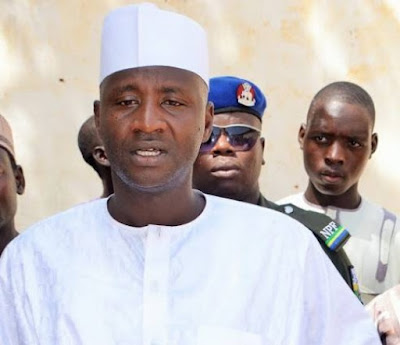 The All Progressives Congress (APC) chapter in Mashi LG, Katsina State has asked the member representing Mashi/ Dutsi federal constituency in the House of Representatives, Mansur Mashi, to resign over his ‘abusive comments’ on President Muhammadu Buhari.

A party official said his failure to do this may lead to his constituency recalling him.

Speaking at a press conference, the chairman of the APC chapter, Armaya’u Doka, said the comment ”belittled the APC and members of his constituency in Katsina, and Nigeria.”

In a copy of the chairman’s press statement obtained, on Friday, Mr Doka called on the National Assembly to also suspend the member ”for his unguided utterances” and prepare for his possible recall.

“The honourable said ‘Buhari had to leave the scene the way the late (late ex-president) Yar’Adua did,’ so that his vice, Yemi Osinbajo, would take over, and that such is the only way Nigeria could make progress at before 2023.

“The audio of what the lawmaker said is out there for all to listen to. By the grace of God, APC will win in the 2023 general elections and the party will continue to grow stronger in followership.

“We call on the APC at the state and national level to call him to order and the National Assembly (to) suspend him for making such comments.

“If our call is not heeded to, we, as members of his constituency, have the right to take necessary action that is within the law,” he said.

According to the party chairman, ”the lawmaker likened the APC to a football team that had lost followership.”

“He said that our great party, the APC is like a football team, Barcelona and Madrid. Once the match is over everyone goes his way. That APC may not win in the next general elections.

“Another thing that worries me most is describing us his constituents, who voted him into office, as illiterates and ‘ignorants’. This is a member that does not even have a constituency office. He never comes back to see his people,” Mr Doka said.

An APC party chieftain in Mashi LGA, simply known as Hon ID, told our reporter that, ”the people of the community are not happy with what the member said”.

“It was a recording of him that was exposed. We all heard it and when our chairman heard it too, we all agreed that the party has to take a stand. Some people were planning to protest over his utterances in the audio recording but we calmed them down and made this press briefing,” he said.

Controversial audio
However,  a copy of the audio which was obtained was recorded in Hausa.

In the audio, the member, in the company of others, suggested that the president’s wife, Aisha Buhari ”will be a better president than her husband.”

“Let me tell you if Aisha had the powers Turai Yar’Adua (the late president’s wife) had during Yar’adua’s time, Nigeria would have been better than what it is now under Buhari. She is a more smart and intelligent person than Buhari.

“And again even when the late chief of staff (Abba Kyari) died, I told people that they will see the real weakness of Buhari that it wasn’t Kyari that is the problem, it is Buhari. And look at it now.

“Buhari will be irrelevant in 2023 because he intends to support (Bola) Tinubu for president under APC. The north will not support that, and that will be his end. Our clerics and the people will not agree with that. He is just a weak person,” his comments loosely translated.

The member did not return several calls and a text message to his number at the time of filing this report.

But, the Guardian newspaper reported that Mr Mashi declined to comment on the matter.