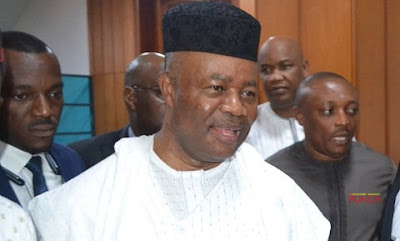 The Minister for Niger Delta Affairs, Senator Godswill Akpabio has denied accusing members of the National Assembly of collecting 60 percent of the contracts at the Niger Delta Development Commission (NDDC).

Akpabio, in a letter read on the floor of the House during Plenary by the Speaker on Thursday said the only reference he made to 60 percent during his presentation before the NDDC committee on Monday was in response to a question by a member of the committee.

He said the member had sought to know whether a Medical Director can serve as an Executive Director Project, to which he responded by saying that since 50 to 60 percent of NDDC contracts were medical related, there was nothing wrong in a Medical Director serving in that capacity.

He also said that the Executive Director Project of the NDDC forwarded to him a list of 19 owed contracts which the Chairman of the House Committee on NDDC insisted must be paid before the 2020 budget of the commission is passed.

He also said that the NDDC has jot executed any contract under the 2020 budget since it has not been passed, while the 2019 budget was passed in April and has not been implemented

The Speaker, Femi Gbajabiamila however referred the letter to the House Committee on Ethics and Privileges.