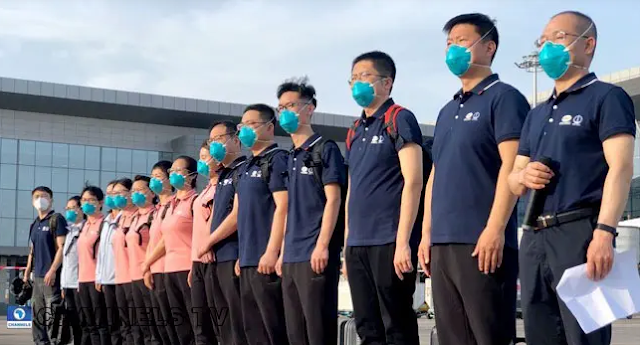 The African Democratic Congress (ADC) has accused the federal government of deceiving Nigerians on the intention of a Chinese team that arrived the country on April 8, 2020.

Prior to the arrival of the 15-man medical team from China,  Osagie Ehanire, minister of health, had said the medical experts from the Asian country where COVID-19 broke out were coming to Nigeria to assist in the fight against the disease.

In a statement on Sunday, Yemi Kolapo, national publicity secretary of ADC, accused the Buhari administration of not being sincere on the whereabouts of the Chinese medical team.

She said the “lame explanation” by the federal government that the medical team was a guest of the Chinese Civil Engineering Construction Company (CCECC) and not of the Nigerian government could not close the “untidy” case, even with the follow-up clarification by the CCECC.


“Members of the Presidential Task Force on COVID-19, health workers, and other essential service providers have worked tirelessly in these trying times to mitigate the effect of the dreaded coronavirus on human lives and on the Nigerian economy and should be supported and encouraged,” she said.

“However, the involvement of the frontliners of the anti-coronavirus efforts, in an avoidable misinformation mess, must not be treated with levity or swept under the carpet. Since it is clear that the Buhari administration has exhausted possible face-saving strategies to no avail, in a matter that had been followed by the entire world, a simple apology will reassure Nigerians that we are not being taken for fools.

“At the beginning of the COVID-19 pandemic, the African Democratic Congress was at the forefront of calls for support for the APC administration because of our conviction that politicising the crisis would neither benefit citizens nor the economy.

“This Chinese medical team saga is, however, a dent that cannot be straightened with a passing remark, not with the kind of world attention the Federal Government attracted to Nigeria a few hours before the arrival of the doctors turned technicians.”

The ADC argued that the health minister had not still told Nigerians why he joined Zhou Pingjiang, ambassador of China to Nigeria, in receiving the Chinese team if their business in Nigeria was not more than what the CCECC had said.

“If we must build a better Nigeria, and stamp out corruption, in line with President Buhari’s much talked about agenda, government officials must lead by example and act honourably even in the most difficult situations,” she said.

“The minister erred in three main areas. He lied, deliberately or unwittingly, that the Federal Government was expecting a 15-member Chinese medical team, and even went ahead to say that they will assist the country in the fight against COVID-19.

“He ridiculed the image of Nigeria by going in person to receive mere technicians from another country in the middle of a big health crisis, and has refused to tell Nigerians on whose order he acted. He trivialised a national disgrace by responding nonchalantly to a matter that has put a huge question mark on his integrity as a senior minister in the Buhari cabinet.

“Not apologising for this needless messy situation would send a wrong signal to the world on the manner of governance in Nigeria. If the APC administration rode to power on an anti-corruption facade, the principal actors should, at least, pretend to be men of honour.”