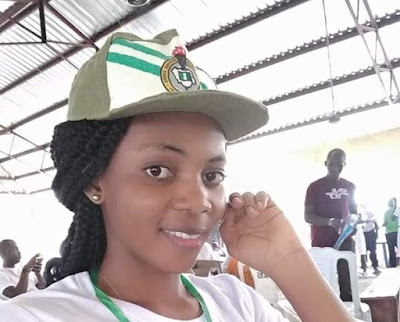 Florence Atiye, a serving member of the National Youth Service Corps (NYSC) in Rivers, has died of an undisclosed illness after journeying to Lagos for a family visit, an official has confirmed.

Chiwendu Chukwu, the NYSC coordinator in the state, said on Wednesday that Florence had embarked on an unapproved trip amid the ban on interstate travel due to the COVID-19 pandemic.

He said a report received by the state’s NYSC secretariat had revealed that she first complained of fatigue while en-route to Lagos but her health would later deteriorate after she met with her family.

Chukwu said that, while the nature of her illness is yet to be disclosed, the deceased passed away after efforts to save her life proved abortive as she was rushed to a hospital in Lagos.

“I don’t know, we’re yet to be given information concerning the nature of her illness. But what her sister told me was that she told them she was coming home and boarded a vehicle,” the state coordinator told TheCable Lifestyle.

“She was charged 10,000 but bargained for N8000. On her way, around Edo side, she started complaining she wasn’t feeling so well. Her sister said it might be the stress from the journey.

“By the time she got to Lagos, she was very weak. They rushed her to the hospital. As much as I was told, she (the sister) knew nothing about any illness and it wasn’t as if she was sick before she left.

“No one could tell but she didn’t say she was sick when she was going home. After speaking to the sister yesterday, the mother couldn’t talk because she has been crying since the incident happened.

“We have arranged for our staff in Lagos to go and see them because we can’t move from here (due to the ban on interstate travel). From what they told me, the girl has been buried.”

Atiye Olawale, a man claiming to be a brother to the deceased lady, had first broke the news on Facebook while paying his last respect for her.

“Good night my lovely sister, Atiye Florence. But this is not our agreement. Rest in perfect peace, last born of the house. Till we meet and part no more,” Olawale wrote in an emoji-laden post.

“Painful exit. You told me that I should come and visit you once you come back from Port Harcourt to Lagos of which I made move. Before getting there, you call me on my way that Bros Wale, don’t bother yourself. I will be fine but greet our mother for me till I come back from my journey.’ Not knowing that you were saying your last word.”

While the Facebook user did not reveal the cause of her death, there were widespread reports on social media that the 2019 Batch C Stream II corps member slumped and hit her head against a brick wall while in her house on May 27.

The reports claimed that she died on May 30.

Chukwu, however, refuted the claims that she slumped and died in Rivers.

“It’s true we lost one of our corps members. But the information being passed across social media that she slumped and died is wrong. That’s not what happened,” the state coordinator said.

“She traveled to see her parents in Lagos because I spoke with her sister yesterday. I was told that when she got home in Lagos, she wasn’t feeling well. They took her to the hospital where she died.

“So, she didn’t slump and die in Rivers. She traveled home and died in Lagos. We have even informed our delegates in Lagos to go pay condolence to her family there.

“We have always told corps members to let us know anytime they’re embarking on such journeys. There’s actually a process that they go through before they leave the state.

“But, since there haven’t been interstate movements in this period, that is why we didn’t even know she was traveling in the first place. It’s just quite unfortunate it all happened this way.”