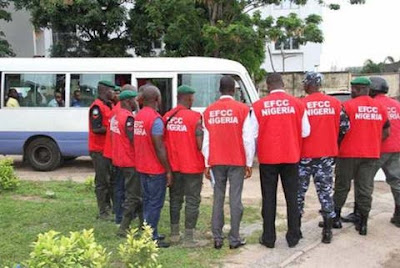 Abia State government has given the Economic and Financial Crimes Commission, EFCC, seven days ultimatum to remove the notices placed on some assets and estates of the government.

The EFCC had last week stormed Umuahia and sealed off some properties allegedly belonging to a top politician in the state.

Briefing newsmen in Umuahia, Attorney General and Commissioner for Justice, Mr Uche Ihediwa, who issued the ultimatum, demanded the anti-graft agency to tender an unreserved apology to the State within the specific period, failing which the State would seek redress in court.


Ihediwa disclosed that most of the properties marked by the EFCC belong to the state government, adding that the state duly entered into partnership arrangements with credible investors for the development of those properties under Public Private Partnership, PPP.

The Commissioner described the action of the EFCC as unlawful, lamenting that the agency didn’t contact the State government to find out the ownership of the said properties whose title documents are domiciled in the State Ministry of Lands.

The Attorney General noted that in 2016, the EFCC also investigated the ownership of most of the properties and the certificates of occupancy and as well as the public-private partnership agreements between the State government and investors of the various assets.

He further stated that the EFCC’s action is capable of scaring investors from the State.