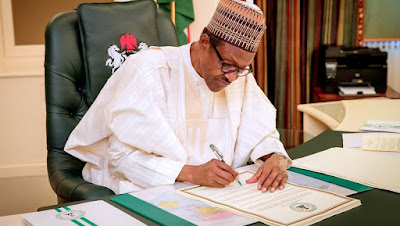 First signed in October, 2018, the order grants offshore assets owners a 12-month window to declare and pay tax on their assets.

It is similar to the voluntary assets and income declaration scheme (VAIDS) backed by an executive order signed by Vice-President Yemi Osinbajo in June 2017 — with the offshore assets component marking the only difference between both schemes.

In a tweet on Friday, the president said the amendment will strengthen enforcement of the order.

“I have signed an Amendment to Executive Order 008, on the Voluntary Offshore Assets Regularization Scheme (VOARS). This Amendment will strengthen the implementation and enforcement of the Order, which I originally signed in October 2018,” he tweeted.

“VOARS grants Nigerians and Nigerian entitles, who have defaulted in declaration of offshore assets, the opportunity to voluntarily declare and regularize these assets. There will be severe penalties for defaulters, and for the financial institutions that enable them.”

Details of the amended order were not provided.

Earlier, Abubakar Malami, attorney-general of the federation (AGF), asked defaulters to take advantage of the scheme to declare and regularise their assets.

“Relevant persons who voluntarily declare their offshore assets and pay the stipulated levy to the federal government will receive compliance certificates which allow them to use their residual assets freely without hindrance,” he had said.