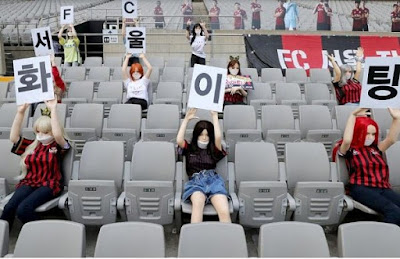 K-League, the country’s professional football, resumed action on May 8 — several weeks after football activities were grounded to a halt across the globe over outbreak of the coronavirus pandemic.

Major conditions for the reopening of the league had included teams playing without fans to combat further spread of the virus.

In a bid to liven up the stadium, Dalcom, a complete business POS Software and Hardware solutions company, had offered to help fill some of the empty seats with 30 “premium mannequins” — 28 of them female, and two of them male.

The move, however, generated backlashes from several quarters on social media, with fans accusing the club of using “sex dolls.”

Some of the dolls can be seen holding signs advertising x-rated websites – despite pornography being banned in South Korea.

Reacting to the development on its social media pages, the football club apologised for the controversies stirred by its action.

The club also dismissed claims that “sex dolls” were used in the stands, insisting they were “premium mannequins”. It however, admitted that the “sex dolls” came from a supplier that produces sex toys.

“We would like to apologise to the fans. We are deeply sorry. Our intention was to do something light-hearted in these difficult times. We will think hard about what we need to do to ensure that something like this never happens again,” the club said in a statement on its Instagram page.

According to BBC, Dalcom has since apologised to FC Seoul, explaining that the adverts were from a sex toy company who had partnered with it.

“They were supposed to take all the logos down before the game started. But there were several hairbands and logos left to be caught by public eye,” Cho Young-june, Dalcom director, was quoted as saying by the media outlet.