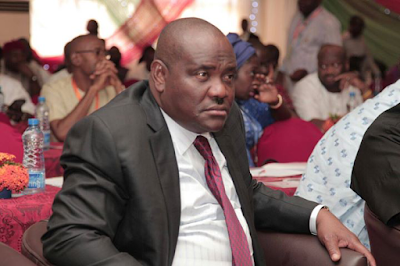 Rivers State Governor Nyesom Wike has accused the Federal Government of playing politics with the fight against COVID-19 (Coronavirus).

Wike also attributed most of the new COVID-19 in the state to sabotage by security agencies and some oil firms.

He said it was unfortunate that the Federal Government was supporting Lagos, Ogun and Kano to tackle the pandemic virus without paying attention to his state.

The governor spoke during two separate events in Port Harcourt on Thursday.

“The nation does not need the nature of politics being played by the Federal Government and her agencies at this time when coronavirus is ravaging the world,” Wike said when received the new Rivers State Commissioner of Police, Mr. Joseph Mukan, at the Government House, Port Harcourt.

The governor, according to a statement by his Special Assistant on Electronic Media, Simeon Nwakaudu, said to defeat the pandemic, all the tiers of government must work together.

Wike added, ”There must be a collaboration to fight the Coronavirus pandemic. NCDC (National Centre for Disease Control) is building laboratories in Lagos, Ogun and Kano, without building in Rivers State.

“This is a state that is exposed to several foreign and local visitors with no single federal intervention.

“When oil companies write to change crew, we insist on knowing their Coronavirus status. If they continue to politicise COVID-19, Nigeria will suffer it.”

The governor recalled that when he demanded support from the Federal Government, many people called for his head.

Also at the inauguration of the state Taskforce on Border Closure, the governor said his administration found out that security agencies allowed new COVID-19 carriers into the state without subjecting them to mandatory health checks.

He said: “We will not relax because if coronavirus escalates in this state, we will not get any form of support. Most of these oil companies also sabotage us. One of the cases at the state treatment centre is an oil worker who came from the rig.

”He tested positive and now our health workers are tracing all his contacts to check the spread”.

Wike charged the task force members to work like persons struggling to save their lives since the state is being sabotaged from all sides.

His words: “This taskforce is very important. When they don’t want you to live, you must devise means to survive. You have to support the security agencies and don’t allow anyone to get into the state without approval.

“Anyone coming into the state must be screened by the health officials. Don’t join the security agencies to extort the people. If that happens, the essence of this task force is defeated.

“We are being sabotaged at sea, land and at the domestic wing of the airport. Sometimes, they secretly receive flights and before we know the people sneak into the town. The Task Force in Ikwerre must check anyone coming from the airport.

”When we shout, they say we are fighting the Federal Government. All we are saying is help us to fight the virus. This is a matter of life and death. You must protect your people”.

Describing the fight against Coronavirus as a non-conventional war, the governor said it had nothing to do with politics.