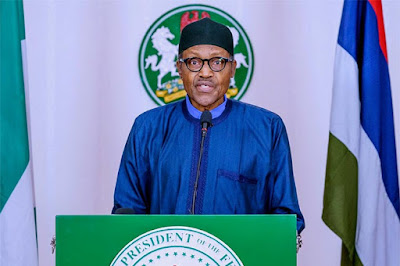 President Muhammadu Buhari will address the nation in a broadcast on Monday following the end of the first phase of the gradual easing of the COVID-19 lockdown.

The president had addressed the nation on COVID-19 measures on three previous occasions.

Sani Aliyu, the national coordinator of the presidential task force (PTF) on COVID-19, made the disclosure when he appeared on Channels Television’s Sunday Politics.


The president was given a situation report on COVID-19 by Boss Mustapha, secretary to the government of the federation (SGF) and chairman of the PTF, on Sunday.

Speaking after the meeting, the SGF said Nigerians must take charge of reducing community transmission of the disease.

He said COVID-19 is a marathon and not a 100-meter race, and that it will take about 18 months for a vaccine to be produced and certified fit for humans.

“COVID-19 is not going to go away in the next one or two months, whoever tells you that is not being realistic. No vaccine is in the horizon, we are talking about 18 months to two years before vaccines would be confirm for human use as far as COVID-19. And unless we get there, it means is that it will remain,” he said.

“It might have cycles, after the first cycle of pandemic, they might be a relief, there can be a resurgence and that is evidenced all over the world. It has happened before as is the nature of infections. So, I believe that what we are going to do now as a taskforce is to come down to the level of having the communities take ownership of the response.

“We have developed a national response which has been cascaded to the states but the communities must plug into the national response. Where we have primary health care centres all over the country, they can be used as stations of reporting of surveillance within a particular community, of tracing, of tracking so that we can take out those that we suspect have exhibited symptoms or have come in contact with people who have exhibited symptoms for testing and isolation. That way you plug them out of the community and reduce the risk of transmission. That is basically what we are working on.”

Mustapha also said the president was satisfied that Nigeria, in spite of its poor healthcare system, has made effort in combating the disease.

“Well, the president expressed his satisfaction that in spite of the difficulties and the fact that as a nation, we lack the capable infrastructure looking at what is happening to the developed world, where countries that have traditionally established health institutions with all the palliatives, with all the privileges, with all the schemes that guide its people have crumble as a result of COVID-19, we are still standing and doing our best under the circumstances to ensure that we provide the necessary direction,” he said.

”So he expressed his satisfaction with the PTF, the minister of health and Nigeria Centre for Disease Control, which are integral part of the taskforce and all the multi-sectoral ministries and are involved in this work – the armed forces, the police, the kind of cooperation we have received from them, without them we wouldn’t have recorded the modest successes that we have achieved. So, he expressed his appreciation that have contributed to where we are today.”