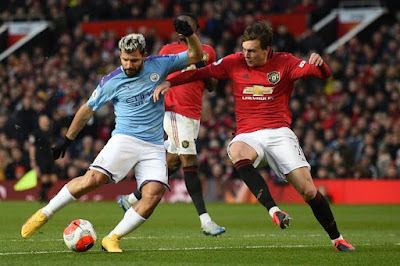 Britain’s Culture Secretary Oliver Dowden warned on Friday that the Premier League does not yet have the “green light” to resume but restated the government’s hope that the season can be completed.

Premier League clubs are due to meet on Monday to discuss the latest plans for “Project Restart” – a day after an expected minor easing of coronavirus lockdown measures.

Clubs are understood to have been told that the use of a limited number of neutral venues is the only way to complete the campaign, to limit the strain on essential services and discourage gatherings of supporters near stadiums.

But those at risk of relegation argue that the integrity of the competition would be compromised by the neutral-venue plan.


Brighton chief executive Paul Barber is opposed to the idea, with the Seagulls hovering two points above the drop zone. Brighton were scheduled to play five of their remaining nine games at home.

Despite extensive contingency planning, Secretary of State for Digital, Culture, Media and Sport, Oliver Dowden, warned the Premier League was yet to get the go-ahead, with testing and player welfare major hurdles.

“They’ve not been given the green light,” Dowden told BBC Radio on Friday.

“I’m really hopeful we can get this up and running but public safety must come first so it’s only if we’re confident of that, we’ll be able to proceed.”

In Germany, the Bundesliga announced this week that it would resume matches on May 16, behind closed doors and subject to extensive coronavirus testing.

Dowden’s comments came as The Times newspaper reported that Football Association chiefs would block any attempt to declare the Premier League season null and void and abandon relegation.

At least one club reportedly wants relegation to be scrapped if neutral grounds are used.

But The Times said it was understood that the FA board supported the Premier League board’s position that the league table should be decided on sporting merit even if it were cut short.

Burnley captain Ben Mee, whose side are 10th in the table, said he believed footballers could “get over” playing at neutral venues if it meant the game could be re-started.

“It’s not ideal but these times, they call for different measures,” Mee told the BBC. “We can certainly get over that fact.”

And he said players would be prepared to spend time in quarantine if necessary.

“I think football is such an important part of our country, whether you like it or not, and people rely on it,” he said. “And if we can give that positive boost to the country, then that would be fantastic.”

Former Manchester United and England defender Rio Ferdinand said there was no viable resolution that would satisfy all 20 clubs.

“People are going to feel at a disadvantage if certain decisions are made but I don’t think the Premier League can have a wholehearted 100 percent win on this no matter what decision they make, which is unfortunate,” he told the Press Association.

Manchester City striker Sergio Aguero and Brighton’s Glenn Murray have raised objections from a safety point of view but Ferdinand said they should put their faith in the authorities.

“The Premier League, the FA and the government, if all of those three bodies give it the green light then I’m sure the players’ protection, health and well-being will be at the top of their agenda to make sure they remain healthy and not at risk,” he said.