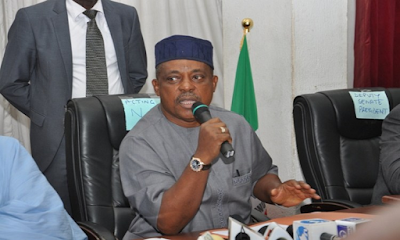 Again, the Peoples Democratic Party (PDP),  is engulfed in crisis as trouble looms over the inauguration of the new Ward Executive Committees of the Party across Nigeria in which accusing fingers are being pointed at its National Chairman, Prince Uche Secondus and National Working Committee (NWC), of mismanaging the exercise because of their alleged personal interest.

It was gathered that the tenures of the occupants, going by the Constitution of the Party, expired by 11: 59 pm on Thursday last week and while the new Excos were expected to be inaugurated on Friday  May 1, in those states where the Congresses had already been concluded before the lockdown orders occasioned by the Coronvirus pandemic in the country.

This development is said to have sharply divided the NWC with some members accusing the National Chairman of the Party, Prince Secondus of not implementing the collective decisions of the body to the letter on vital issues for the progress of the Party.

One of the aggrieved who spoke on the condition of anonymity said”all is not well in the party right now, our National Chairman is the only one that can explain the case of the current issues being raised concerning the inauguration of the Ward Excos because we sat as a body and resolved that the exercise should be put on hold in some places such as Ekiti, Kano, Cross Rivers and others where we had some issues to be resolved, but to the surprise of every one, the Press statement on the decision was never made public.


“Our findings revealed that the non-release of the statement at the appropriate time gave room for manipulations. For instance, in Ekiti State where we have some issues to resolve, two parallel Excos were inaugurated, one on Thursday and the second one on Friday, we even learnt they went to court over the matter under this lockdown.

“Also note that there are inuaguration of parallel State Excos in Osun, Ondo and of late, Ogun States, all these should be of concern to loyal party members and they should look into these issues before the party collapsed all because of personal interest.

“Our take is that if the National Chairman had allowed the Press statement as resolved by the NWC, there would not be room for the shortcomings we are witnessing now, am afraid if something is not done urgently to rescue the Party, we should as well forget 2023.

“Another issue of contention we have been battling with is the indefinite suspension slammed on some of our lawmakers in the House of Representatives. It was supposed to last for a month but look at where we are now. We never tabled their extension at any of our meetings, the Chairman only extended it by fiat through a Press statement.

“Anyway, some of us kicked against it because of the realities on ground. PDP is not the only party that makes up the Minority in the House, others met and they elected their leaders which were ratified by the House. We think that those who are representing us are doing very well based on their brilliant performances, they are our first eleven, we don’t know why the Chairman is looking the other way.

“The time has come when the Chairman of the PDP Governors’ Forum, Alhaji Aminu Tambuwal, a former Speaker of the House of Representatives should wade into the matter before the affected lawmakers will be frustrated to dump the Party.

However, the National Chairman of PDP, Prince Uche Secondus and the National Secretary, Sen. Umaru Ibrahim Tsauri, in a joint statement on Saturday, reacted to the inauguration of organs of the Ogun state chapter of the party, dissociating the  the NWC of the Party from such an illegal action.

According to the statement, the attention of the National Working Committee (NWC) of the Peoples Democratic Party (PDP) has been drawn to some media publication, especially, the online media concerning a purported inauguration of certain unknown persons as State Officers of the Party in Ogun State on Friday, May 8, 2020.

“We want to advise members of the public, especially, the teeming members of our great Party in Nigeria and Ogun State in particular, that the Peoples Democratic Party has not conducted any congress for the election of the Party officers at any level of the Party: Ward, LGA Chapter and or State, in Ogun State.”