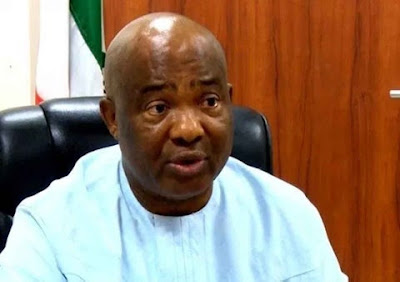 Governor Hope Uzodimma of Imo state has explained that his government sponsored the bill on the repeal of Governors and Speakers Pensions and Privileges law of 2007 because it was illegal and designed to allow a few privileged people feed fat on the commonwealth of the people.

He said the law was against the Pensions act which stipulates that only those who have put in a minimum of 10 years in   public service where entitled to pensions, adding that former governors and Speakers stay in office for a maximum of eight years.

He also  wondered how the same people who collect fat severance allowances at the end of their tenure can turn around to be paid Pensions as well.

I was alarmed that the financial implications for the state will not only be scandalous but indefensible. My simple calculation told me that there could come a time when the state could be spending more than one third of its resources to maintain former Governors and Speakers”

He continued   “the same Governors and Speakers also received severance allowances,   amounting to several millions of Naira, when they   disengage from office.

How then can the same category of former public office holders turn around to receive Pensions?”

Even more importantly the Pensions act is very clear that only those who have served in the public service for a   minimum of 10 years are pensionable. Paying governors , Speakers and their deputies who spend a maximum of eight years or less in office is actually criminal because it is   against the law of  the land.”

It is noteworthy that I am supposed to benefit from this law when I leave office as governor. Yet I called for its repeal. This should leave no one in doubt that I  am acting in the best interest of our state and our people. I believe that those of us who have had the privilege of occupying exalted positions must be human enough to resist the temptation of feeding fat from the lean resources of the state at the expense of the people. We must know when to say enough is enough “

Uzodimma said   he could not condone such a law, and that history and his conscience  will not forgive him if  he did not act in the interest of the people. “I had no choice but to ask for its repeal as part of my  government’s recovery agenda. Yes, I needed   to recover the billions of public   funds that would have been lavished on a privileged few and plough it back to   the more important business of developing our state.”

Meanwhile, The visitation panel to the Imo state University Teaching Hospital, IMSUTH, led by  Professor Frank Akpuaka, has described the N148 million wage of IMSUTH, as “bloated”. The panel, therefore,  called on Governor Hope Uzodinma, to look into the activities of the management that led to such amount as wage bill.

It was gathered yesterday in Owerri, that the revelation was made when  Akpuaka, alongside his members, submitted their report on IMSUTH to Uzodinma at government House.

According to Uzodinma regretted the non accreditation of the College of Medicine since inception of the school and  attributed that to sheer negligence by the past School Administrations and past governments.

The governor said: It will no longer be business as usual for contractors and individuals who take advantage of the administrative lapses in the institution to set back the wheel of progress of the hospital.”

Part of the advice and findings of the  Akpuaka panel as submitted to the governor stated was canvassing  for improved IGR, automation of the Accounts Department as the panel discovered that the institution maintained 23 Bank accounts, when only 10 were active and advised on the need to  reduce the number of bank accounts to guard against fraud.

“The Panel suggested the need to implement Procurement laws, especially as it concerns award of contracts and the need for Staff audit to reduce the level of ghost-worker syndrome, which they feared could have been responsible for bloated wage bill of N148m a month when the school’s IGR is only N15m-N20m per month.”

Part of the  challenges of the institution include; “Poor roads, poor funding, infrastructural decay, inability to retain staff, and non  accreditation by the National Universities Commission (NUC), which has resulted in non-admission of medical students for the past four years.”