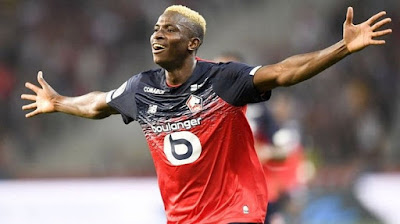 President of the Nigerian Football Federation, NFF, Amaju Pinnick has added his voice to the growing debate on who is the better striker between Chelsea forward, Tammy Abraham and Nigeria striker, Victor Osimhen, who plies his trade in France.

Pinnick had tried to lure Abraham to play for Nigeria without success despite his closeness to Tammy’s dad.

“I don’t believe that’s an issue, you have a choice, it’s not just today, at a point John Fashanu refused to play for Nigeria, I was still in secondary school if not primary school,” said Pinnick.

“We are all human beings, we are subjected to the various choices that we make, so to me it’s their choice.


Having missed out on the services of Abraham, the football administrator has claimed that the Blues number nine is an inferior player to Victor Osimhen who had an excellent season with Lille.

Pinnick continued : “When we have people like Dessers that was even selected among the Eredivisie Team of the Season, I think we are happy and we are home. Prolific goalscorer.

“We have Osimhen that is doing very well, I cannot tell you that Tammy Abraham is better than Osimhen, it’s not possible.

“I know the history of Tammy but if at the end of the day he decides to play for England we just wish him only good luck, Tomori too we wish him good luck.”

“Let us watch and see the future of these players, we are happy and very contented with what we have right now, the only thing we need to do is consolidate and build a very strong Super Eagles that can contest for the qualifying rounds and World Cup proper, we have a very young team.”

Tottenham Hotspur’s Dele Alli and Chelsea midfielder Ross Barkley are the other players in the England squad that were eligible to represent Nigeria before playing cap-tying games.