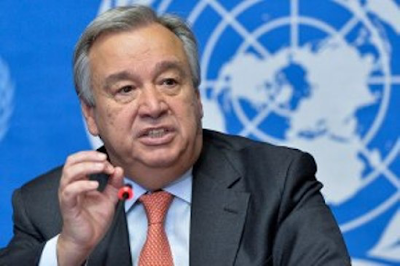 Guterres stated this in an article titled, “Global Solidarity with Africa is an Imperative”, published on the UN news website.

“Many difficult decisions will need to be taken as the pandemic unfolds, and it will be essential to retain the trust and participation of citizens throughout.

“These are still early days for the pandemic in Africa, and disruption could escalate quickly,” he said.


While the pandemic is slowing in parts of Europe and Asia, it is still very much growing globally.

About 106,000 new cases of coronavirus were reported to the World Health Organisation in the past 24 hours – that’s the most since the outbreak began.

Director-General Dr Tedros Adhanom Ghebreyesus revealed the numbers at the WHO regular briefing. Two-thirds of those cases came from just four countries, he said.

The global tally of cases is nearing five million, with more than 324,000 deaths, according to figures collected by Johns Hopkins university.

The U.S. currently has the most cases, with 1.5m, followed by Russia, Brazil and the UK.

The Secretary-General stated that although the continent had responded swiftly to the pandemic and reported fewer cases than feared, “much hangs in the balance”.

According to him, vigilance and preparedness are important, with no fewer than 2,500 lives already claimed by the disease in Africa.

He warned that the virus was a threat to recent progress in the continent in the areas of economic growth, digital revolution and the free trade area agreement.

He predicted that the pandemic would “aggravate long-standing inequalities and heighten hunger, malnutrition and vulnerability to disease”.

“The opening of the trade zone has been pushed back and millions could be pushed into extreme poverty.

“I commend what African countries have done already, together with the African Union.”