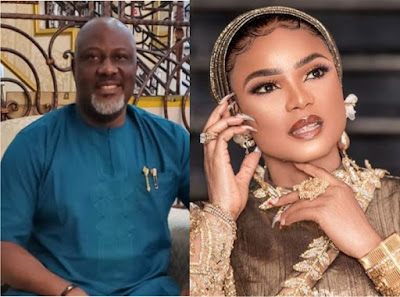 Nollywood actress, Iyabo Ojo has debunked the report that she is secretly engaged and set to walk down the aisle with former senator, Dino Melaye.

A report has it that the divorced mother of two got engaged to Dino Melaye last year, and they are set to take their relationship to the next level.

The rumor was sparked by an Instagram blogger known as Gist lover who claimed Iyabo posted a photo of herself flaunting her diamond ring and adding the ‘Olori’ tag to her social media name.

Gist lover wrote on IG: “Hello Tueh Tueh, so mama added olori to her name and y’all kept wondering why she did that? some blogs even speculated she got married to a king🤣🤦‍♂️🤦‍♂️.

“Well our very good dramatic senator yaf engage my TIKTOK mama, this one nor be Bisi Omologbalogba o, this one Na confirm made, Iyabo is Kuku a single mother and uncle Dino is divorced so two can play the game, Love in the air, this love no go die o.
“Actress Lola Alao already took her place as the mother-in-law already, but madam should be careful because when Senator Dino was dating Actress Bisi Omo logba logba then, this was the same way Aunty Alao was over her, until Aunty Bisi get belle for the senator.
“Mama Alao come change mouth say them no agree say she go born for him brother,enough said,love is a beautiful thing and I like Actress Iyabo too😜let’s enjoy this naija🇳🇬🇳🇬🇳🇬🇳🇬money together,let’s choose a wedding hashtag #YABDIN2020😂, I come in peace.” 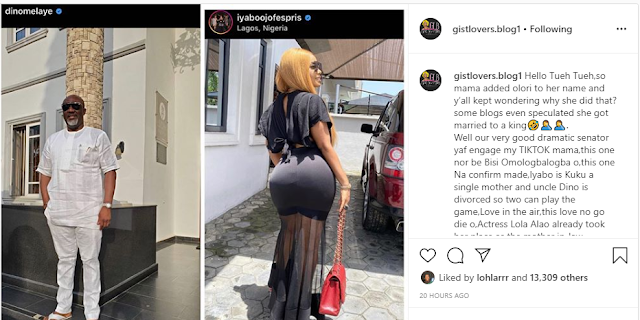 Following the report, Iyabo Ojo released a video on her Instagram page, where she rained curses on everyone who have taken money or eaten her food and still went behind her to back to spread rumors about her.


Dino Melaye has also debunked the rumour that he is engaged to Iyabo Ojo. According to the senator, bloggers who came up with the engagement story needed a name to sell their story, which is why they came up with such story. He added saying he can never have a secret engagement.

Dino however promised to release a ‘single’ about the rumours about him flying around.