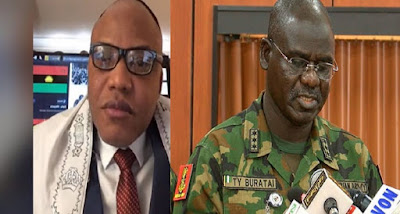 Nnamdi Kanu, leader of the outlawed Indigenous People of Biafra (IPOB), has thrown mud at the Nigerian Army saying the military only gets the muscle to attack civilians but becomes inefficient when faced with an armed opponent.

The IPOB leader posted the comment on his Facebook page alongside a trending video (see video below) showing some Nigerian soldiers cursing the Chief of Army Staff, Tukur Buratai.

Kanu claims Buratai is currently in Niger Republic and has blamed the 59-year-old Army general of “abandoning soldiers to be killed by Boko Haram.”

“Come and hear #ZooNigeria Soldiers crying like little babies in soiled nappies because they encountered a group of bandits,” Kanu wrote. “These are the cowards that jumped my fence into my compound on 14 September 2017 shooting and killing unarmed civilians.”


The IPOB leader added: “Look at the shame of an army they think can stop an armed IPOB when the time comes later this year. See how the COWARDS are crying and cursing Buratai. The only time you see Nigeria army boasting and displaying their might is when they are killing and raping unarmed civilians. In battle against armed opponents they are nothing, absolute rubbish.”
Meanwhile, as regards the said trending video, the army has issued a statement confirming that the incident did occur and that the soldiers involved have been identified and would undergo “observation and counselling.”

In a statement it said troops ran into Improvised Explosive Devices (IEDs) planted by the terrorists.

The ambush occurred eight kilometers ahead of Buni Gardi, in Gujba Local Government Area of Yobe State on May 18, 2020, it said.

“Two soldiers paid the supreme price and three other soldiers sustained injuries as a result of the IED explosion.

“Additionally, a recovery truck, one troop-carrying vehicle and a water tanker that ran into the IED were destroyed by fire. Three terrorists were neutralised while an unconfirmed number escaped with various degrees of injury,” the Army added.