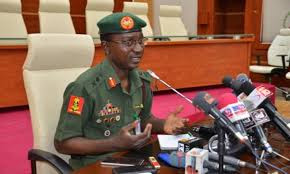 The Defence Headquarters might have set the Nigerian military up for backlash as it called repentant terrorists “clients” on Friday.

The Coordinator, Defence Media Operations, Maj.-Gen. John Enenche, used the term at a press conference on the operations of the Armed Forces of Nigeria (AFN).

But the federal government, in what could be described as carrot and stick approach, established a De-radicalization, Rehabilitation and Reintegration programme.

The military boasts that the scheme, under Operation Safe Corridor, had recorded tremendous success.

At the briefing, Enenche said 280 “clients” have successfully undergone the programme and reintegrated into the society.

He disclosed that 25 of the number were repatriated to Niger Republic.

“Presently, 603 clients are due to pass out in June 2020. Other fighters are hereby encouraged to come out of the bush/hideouts to surrender,” NAN quoted him as saying.

Enenche noted that surviving Boko Haram and ISWAP members were currently on recruitment drive due to shortage of manpower on their part.

He appealed to parents, traditional rulers, community, opinion and religious leaders, to dissuade their wards and children from succumbing to inducements by the terrorists.

Under Operation Whirl Stroke, Enenche said troops, on May 12, killed four suspected armed herdsmen while responding to a distress call on infiltration at Agasha in Guma Local Government Area of Benue State.

The General announced that the troops recovered two AK-47 rifles, four magazines and 65 rounds of 7.62mm ammunition from attackers.

“The general public is hereby requested to continue to provide credible information to the Armed Forces of Nigeria, to facilitate our operations in this regard.

“The High Command of the Armed Forces of Nigeria congratulates gallant troops for successes recorded. The AFN remains decisive to end the insurgency and other security challenges in the country”, Enenche assured.

The Defence Headquarters thanked citizens for their support and solicited additional credible and timely information that will facilitate proactive engagements in operations.