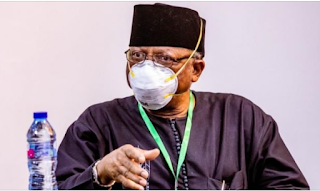 Addressing members of the house of representatives on Tuesday, Ehanire said the drug has been administered to patients in Lagos state.

He, however, did not say the outcome of the treatment.

“We have been using that (remdesivir); we have tried that in Lagos too,” he said.


“So, we have tried the antiretroviral drug to see what effect it has.”

The minister said the drug, originally developed as a potential treatment for Ebola, is one of the options which Nigeria has adopted in treating COVID-19 patients.

But he said no herbal medicine has so far been approved for the disease.

TheCable had reported how 150 patients recovered after being treated with the experimental anti-retroviral drug.

Gilead Sciences, the pharmaceutical company that developed the drug, said it was found to be effective on the patients during the trial which began in February.

But it added that the optimal duration of treatment is still being studied in ongoing clinical trials.

The US Food and Drug Administration (FDA) has approved the use of the drug for hospitalised COVID-19 patients.

The World Health Organisation (WHO) has not approved any drug or vaccine for COVID-19.