NDLEA opens up on large supplies of weapons, cannabis seized in Edo State 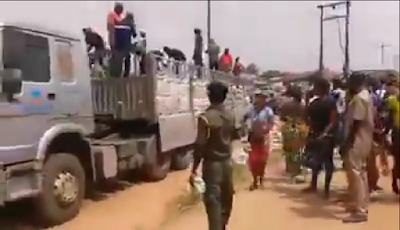 The Edo State Command of National Drug Law Enforcement Agency (NDLEA) in Benin City has described as unfounded the claim of large supplies of arms, ammunition, and cannabis seized by Edo youths in a video trending in the social media.

State commander, Mr. Buba Wakawa said that the video is a mischievous attempt by some criminal-minded individuals to unnecessarily heighten political and ethnic tensions in the State despite the prevailing peace and security.

“I am shocked by the deceit and false claim because the video being circulated was the seizure of a truck containing Cannabis Sativa that was intercepted by the Edo State command in November 2016.

“The case was charged to court and the perpetrators duly convicted. Unfortunately, the same video is being used to spread rumours aimed at creating fear and insecurity in the State. It is completely spurious and should be ignored,” Wakawa stated.


The false video urged Nigerians especially Southerners to be vigilant because supplies of ammunitions to Benin City have been intercepted by Benin youths at Aduwawa area of the State capital meant for Hausa community.

Wakawa added that in November 2016, the command intercepted a Dangote Truck at Enweh with 7,950kgs of dried cannabis concealed in bags of cement.

Investigation revealed that the driver, Segiru Amadu collected the sum of 1.3 million naira to transport the drugs to Maiduguri. The Agency got excellent cooperation from Dangote Cement Company in the said case.

The driver who fled the scene of seizure was arrested by Dangote Cement Company and charged for breach of contract before a Kogi State Magistrate Court.

After serving his jail term in Kogi, he was brought to Edo State for the criminal trial of unlawful transportation of cannabis for which he was also convicted.

Subsequently, Dangote Cement Company was given a clean bill of non-complicity in the case and equally commended for its high level of cooperation.

The commander further clarified that the cannabis seizure in 2016 has nothing to do with firearms or the management of Dangote Company, stressing that the good reputation of Dangote Group of Companies should not be smeared.

The Agency maintained that investigation will be conducted to uncover those behind the calumny and punish them accordingly.