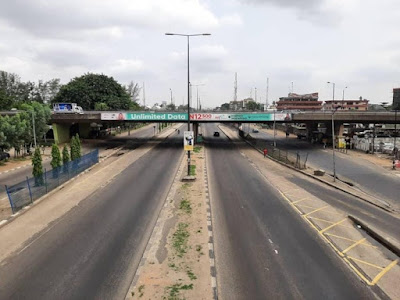 The enforcement of the restriction orders in the Federal Capital Territory FCT turned dramatic on Sunday when the Pastor in Charge of Shekinah Glory Church, Jabi, along with some of his Deacons and workers scaled the fence to evade arrest on sighting the Ministerial Enforcement Team led by Mr Ikharo Attah.

This was as 22 persons from Zamfara state who had hidden under sacks of beans and potatoes were also arrested when a truck supposedly conveying foodstuffs from the state to the FCT was intercepted at the Abuja City Gate having beaten several security cordons across some states.

Consequently, an FCT Mobile Court sitting in Jabi has ordered an indefinite closure of The Shekinah Glory Church, located opposite Citec Estate, Jabi.

The Presiding Magistrate, Mabel Bello also directed that the General Overseer of the church, simply identified as Pastor Kalu, who escaped with some leaders of the church by scaling the fence, be tracked and arrested.


Giving an update on the activities of the Enforcement Team, its Chairman, Mr Ikharo Attah said he had immediately mobilized his team to the area on receipt of intelligence that the church was in full session, a clear contravention of the ban on religious gatherings in the territory.

He said but on sighting the team, the Pastor, some leading church workers including Deacons and Ushers jumped the fence and escaped arrest.

However, some of the church members, especially the womenfolk who could not scale the fence, were arrested and arraigned before the court.

According to him, the Magistrate found the church workers guilty of violating the lockdown restriction order and sentenced them to three hours of supervised community service with an option of N1, 000 fine.

Attah added that a search for the fleeing cleric had begun, saying he must be made to face the law for disobeying government’s directives and endangering the lives of his members.

He explained that the team also intercepted a truck loaded with foodstuffs from Zamfara state, which had 22 passengers hidden beneath the bags of beans and potatoes.

Attah noted that during interrogation of the driver and occupants of the truck, it was discovered that the 22 passengers had defied government’s ban on interstate movement and were almost sneaking into the city centre.

Consequently, the Enforcement Team immediately escorted the passengers out of Abuja with an order that they should return to Zamfara state and remain there until the Covid-19 pandemic has abated.

“If enforcement officers in states were doing their jobs properly, the truck ought to have been stopped in Zamfara. It shouldn’t have crossed Funtua in Katsina state and the entire Kaduna state before entering into the FCT”, he fumed.

Attah said the team had on Saturday night also intercepted seven busload of passengers who had attempted to enter into the nation’s capital through the Zuba axis.

In spite of the ban on interstate movement, the seven buses came in from Kaduna, Kano and Katsina states, many of them filled with roadside artisans and workers at a construction site in the Karu axis of the FCT.

One of the drivers confessed that before the ban on interstate movement, he had been bringing passengers into the territory at least once in a week amid the lockdown.

Attah who praised security agencies in the territory for their dedication to duty also urged members of the public to continue to avail the team of necessary information in order to ensure enhanced operations.

Turning back the last of the seven buses, Attah said; “These persons here came in from Katsina. They have been able to pass through Kano, pass through Kaduna which are under curfew and they have arrived in Abuja. We are shocked at how they manoeuvred their way through Katsina when there is a ban on interstate movement. How they did that is something else. The driver confessed that amidst this lockdown, he usually goes there once or twice in a week to bring in passengers. In FCT, we cannot afford that and so we decided to turn them back to where they were coming from”, he said.