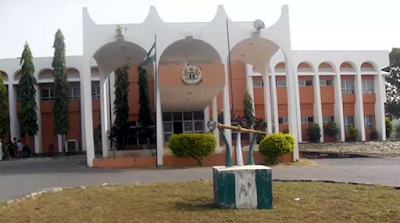 ‌
The Katsina State House of Assembly has lost one of its members, Abdurrazaq Tsiga.

Tsiga was a lawmaker representing Bakori constituency at the state assembly.

He was the House Deputy Leader and Chairman, House Committee on Business, Ethics and Privileges.

Sources said Tsiga died in the late hours of Sunday at the General Hospital, Malumfashi after a protracted illness.

It was learnt that Tsiga fell ill shortly after the inauguration of the sixth Katsina Assembly in June 2019.

The Speaker of the Assembly, Mallam Tasiu Zanngo led other house members to the burial of the lawmaker on Monday in Tsiga town.

The spokesman for the House of Assembly, Mallam Nasiru Zanngo, confirmed the development.

The late Tsiga was serving a second term. He was Deputy House Leader and the Chairman House Committee on Business, Ethics, and Privileges.

Tsiga retired as director of education in local government Service in the state before venturing to politics.