How Universities misled us to pay salaries of dead lecturers -FG 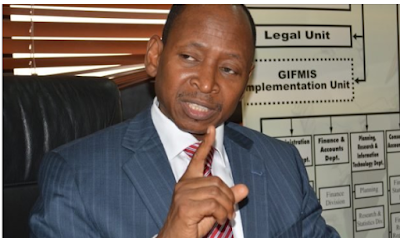 The federal government has accused some universities of sending the names of late lecturers for payment of salaries.

In a statement on Monday, Ahmed Idris, accountant-general of the federation, dismissed the criticism of the Academic Staff Union of Universities (ASUU) that the Integrated Payroll and Personnel Information System (IPPIS) is fraught with irregularities.

Henshaw Ogubike, director, information, press and public relations in the office of the AGF, issued the statement on behalf of Idris.

He also gave explanation on why lecturers have been receiving lower salaries following the implementation of IPPIS.


“On the alleged payment to dead university staff, it means the Institutions deliberately forwarded to IPPIS the list containing dead ASUU members as being part of their personnel, to get more personnel fund,” Idris said.

“When President directed that ASUU be paid, the OAGF sent a letter, through NUC Executive Secretary, requesting for the list of ASUU members through their VCs. We run BVN (biometric verification number) test on the list forwarded to us as we are aware that we cannot use the old nominal roll because of changes that might have likely taken place.

“It is the responsibility of the Institutions or Agencies to inform the IPPIS office about death, resignation or exit from service before due date. We sent payroll analysis to the tertiary institution Bursars for review of any omission or names to be excluded.

“This issue is a cheap propaganda by ASUU to denigrate IPPIS for obvious reasons.”

Idris said the federal government decided to set the records straight because of the extent which ASUU had gone to cast it in bad light.

“It is pertinent that the Office of the Accountant General of the Federation (OAGF) puts the records straight for the interest of the general public and majority of staff of tertiary institutions that have displayed unparalleled understanding and cooperated with IPPIS till date. We hereby state as follows,” he said.

“The Pay As You Earn (PAYE) Tax is a statutory tax deductions paid by all salary earners. IPPIS applied the correct rate in compliance with Section 34 of the 6th schedule on personal income tax (Amendment) Act of 2011. Prior to migration to IPPIS, the rate of tax being applied by tertiary institutions was not correct, leading to underpayment of PAYE Tax.

“It is important to note that all states governments of the federation made claims on the federal government to pay the differential arising from underpayment of tax by these institutions. The federal government has paid several billions on behalf of these institutions because of their underpayment of PAYE Tax. The request by the tertiary institution unions to formalize tax evasion through IPPIS is not only untenable, but unpatriotic request to violate extant laws on tax.”

Idris also explained that part of the deductions being made from the lecturers salaries would enable them access loans to own their personal houses after retirement.

“NHF Deductions: The National Housing Fund (NHF) is 2.5% of basic salary. This is another statutory contribution backed by the Act of National Assembly,” the statement read.

“The ASUU is bringing claims that those laws should not be applicable to them and thereby should be exempted or be made optional for them. The request for breach of Act of Parliament is not within the ambit of the IPPIS or the (OAGF). They have been advised to approach the National Assembly for amendment of the Act.

“This is a penny wise argument not expected from Ivory Tower. The Consolidated salary is what is applicable to determine employee’s contribution of all Federal employees’ as Salaries Income and Wages Commission (SIWC) have consolidated salary without the composition. The actual amount contributed by the employee determines what the Government contributes as well. Deduction is in line with the Pension Contributory Act.

“Any other salaries and allowances approved by any other agency in Nigeria which are not formalized by these two agencies will amount to illegal payment. Therefore, ASUU and other unions are expected to understand this. The fact that they arm-twisted their institutions to pay them these allowances does not translate to legality.”