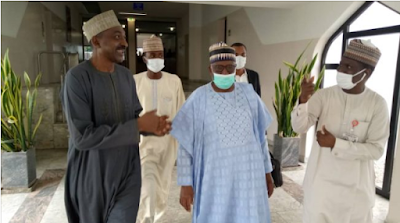 Ibrahim Gambari, a professor and diplomat, who is expected to be announced as the new chief of staff to President Muhammadu Buhari, has arrived at the presidential villa.

He arrived at the villa some minutes before 11am on Wednesday, and was welcomed by Tijani Umar, the state house permanent secretary, and other senior officials of the presidency.

Gambari had his temperature checked, and he used hand sanitiser before being ushered into the villa.

He is expected to be at the federal executive council (FEC) meeting.

Some ministers have arrived for the inaugural virtual meeting of the federal executive council.

Those present in person are ministers of finance, budget and national planning, transportation, information and culture, power, solid minerals, agriculture and commerce.

Boss Mustapha, secretary to the government of the federation (SGF), Babagana Monguno, national security adviser (NSA), are also present at the council chambers.

Gambari, who is from Kwara state, was minister of external affairs under Buhari’s military regime between 1983 and 1985.

He is currently the founder/chairman of Savannah Center External link in Abuja, a think-tank for research, training and public policy debate on the nexus between diplomacy (conflict resolution), democracy and development in Africa.

His appointment as chief of staff was officially announced at the virtual meeting of FEC by the SGF.