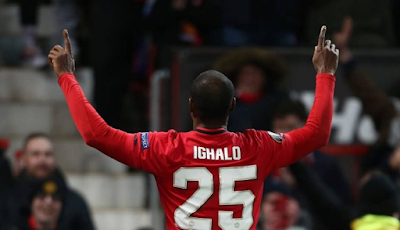 While the Nigerian striker l has stated that he would love to make his six month loan move from Shanghai Shenhua to Man United permanent but the old Trafford outfit are still dilly-dallying over a fresh deal amidst reports  that  they are willing to bring on board younger strikers.

Meanwhile, Shanghai Shenhua has offered Ighalo a mouth-watering £400, 000 per week (N190million) wage  as an incentive to return to the Chinese side as against the £300, 000 he was receiving before his loan move to Manchester United in January where he currently earns £100,000 per week.

But Shorunmu said it could be very difficult for players to take an informed decision in such circumstance, advising  Ighalo to consider the level he wants to take his career to before making a decision.


“He(Ighalo) must think of what he wants to do after football before making a decision,” stated  the former national team goalkeeper.

“ Some people might consider the offer from China too good to ignore but money is not all that matters even at the peak of one’s career.”

Adepoju described the decision as a big one as the Nigerian striker is torn between staying at glamorous club where he would get less pay and moving back to China where mega bucks awaits him.

He said: “Well, I think it is a big decision for him to make based on the offer from China which is mouth-watering.

“If Man United is offering him pension in his contract he can take it. The offer from his parent club is very juicy but you never can tell what will happen when he moves back there.

“Manchester United is a big club with huge pedigree. If they offer Ighalo more than what he is earning presently when the contract is made permanent, he should accept it.

”Playing for Man United will be more dignifying and dependable than going to China,” noted  Adepoju.